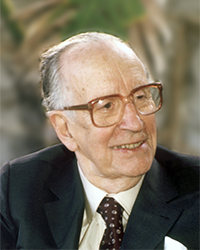 The personal lawyer of Calouste Gulbenkian, employee no. 1 and lifetime president of the Calouste Gulbenkian Foundation – a position he held from 1956 to 1993 – José Henrique de Azeredo Perdigão played a leading role in establishing the foundation and subsequently in setting up the Modern Art Centre that he conceived and brought about.

Trustee, among other companies and firms, of the Banco Nacional Ultramarino, he was also president of the General Assembly of the Bank of Portugal, of Banco Fonsecas, Santos e Viana and of Sacor, a merit member of the National Academy of Fine Arts and the Portuguese Academy of History and governor of the Fondation Européenne de la Culture.

He has given lectures, conferences and speeches on juridical matters as well as broader issues of general culture and published a series of works.