Researchers reveal the dynamics of how centrioles­ (essential structures for the normal functioning of cells) form without a template, observing them at an unprecedented 4D resolution. Behind the findings lies a fortuitous international collaboration spanning a remarkable longitude: United States, Portugal, and India. The experiments described in The Journal of Cell Biology show how a centriole assembles without a template and reveal new data to understand the complex molecular regulation of the process.

Centrosomes are cellular organelles that contain two centrioles surrounded by a matrix of proteins. During cell division, they interact with the genetic material and help distributing it evenly between daughter cells. Anomalies in this process cause genome instability, leading to tumor formation, infertility and microcephaly. The function of centrosomes requires that cells always have the correct number of centrioles and this entails that they are duplicated before cell division. Typically, this is achieved by using mature centrioles as a template. But that is not always the case. In some circumstances, centrioles can assemble de novo, without a template, thus escaping the tight control cells exert on their numbers.

An international team co-led by IGC principal investigators Ivo Telley and Mónica Bettencourt-Dias aimed at better understanding how centrioles are formed de novo. This process occurs naturally in many organisms, such as some plants, bees, or mice, and it is possible that it also happens in an untimely manner in cancer, accelerating carcinogenesis. “In our laboratory, we had already understood that it is possible to induce the formation of centrioles de novo, by manipulating a protein that we discovered in 2005 called PLK4. It controls the normal formation of centrioles and is deregulated in cancer. But we did not have enough resolution to observe this process live, and this was very frustrating”, Mónica Bettencourt-Dias says. 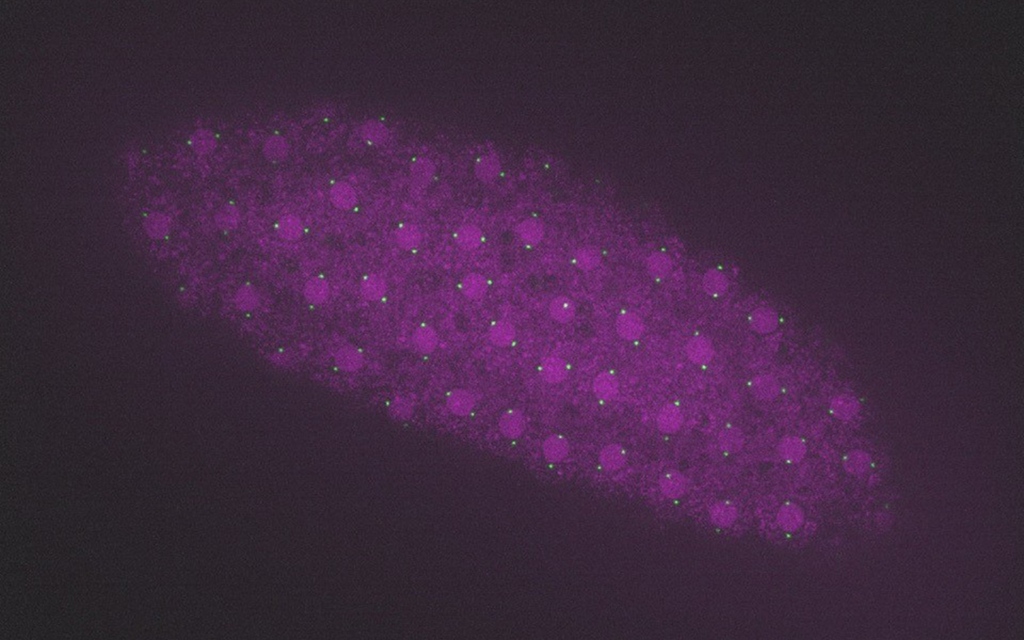 Answering these questions required an innovative experimental design. It consists in extracting the inside of the egg of the fruit fly, a widely used model organism, and placing it under the microscope. “In the egg there are no centrioles, but we can trigger their formation when we add the protein PLK4 in excess. But the fact that this process starts deep inside the egg makes its observation very difficult, a barrier that was only possible to overcome with this technique. It allowed us, for the first time, to visualize the onset of centriole assembly and monitor its dynamics over time with high spatial resolution”, reveals Catarina Nabais, first author of the study.

“We looked in detail at the dynamics in space and time of the formation of centrioles de novo to understand how it occurs and how PlK4 levels or other factors might affect it”, Ivo Telley explains. In a course in California, Catarina Nabais met Satajit Mayor, a researcher from India that used a new microscopy technique that allows measurement of very small amounts. Catarina spent part of her doctorate in Bangalore taking measures and discovered that the levels of PLK4 in our cells are extremely small, allowing a fine control of the number of centrosomes. A small increase is enough to form several of these structures, as it is observed in cancer. Using mathematical modelling with Delphine Pessoa and Jorge Carneiro from IGC, the team also managed to predict how different concentrations of the PLK4 protein affect the dynamics of centriole formation.

“This study reveals new angles of the principles that govern centriole assembly and the dynamics of the formation of cellular organelles, opening new perspectives to understand how this phenomenon changes in carcinogenesis”, Mónica Bettencourt-Dias states. “Progress in Science happens through collaborations between multidisciplinary teams and this story is an example of such. Biology, physics and mathematical modelling were all brought together to help solve century-old questions”, Ivo Telley highlights.