Researchers discover that the loss of a specific molecule may explain how primates evolved to be able to resist to bacterial infections leading to sepsis. The study published in the prestigious scientific journal Cell Host & Microbe reveals that, in mice, the absence of this molecule (the α-Gal glycan) from the antibodies structure increases the ability to the same antibody to kill bacteria. This evolutionary advantage emerged with a cost, the reproductive decline. These findings shed light on key aspects of hominid evolution and reveal new mechanisms that confer resistance against sepsis, crucial to understand and fight the disease.

Sepsis is a life-threatening organ dysfunction caused by a deregulated host response to infection that accounts for up to 20% of total global mortality. “This enormous burden on humanity has led us to hypothesize that mutations associated with better resistance to sepsis would represent a tremendous evolutionary advantage. This could have been a key factor that drove the selection of mutations that rendered Old World Primates unable to express α-Gal and able to produce antibodies that kill pathogens that lead to the development of sepsis”, explains Miguel Soares, principal investigator at Instituto Gulbenkian de Ciência who led the study. 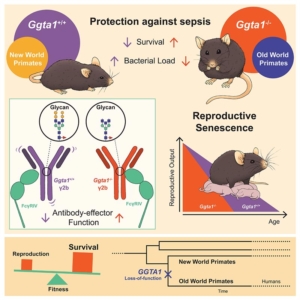 Almost a century ago, it was discovered that the primates that gave rise to modern man lost α-Gal glycan (a type of carbohydrate molecule) during its evolution. The discovery revealed that a series of different mutations turned an enzyme (named GGTA1), required to produce the α-Gal glycan, non-functional in Old World Primates (originated in Africa and Asia, that include humans). These ideas drove the team of researchers to dig deeper and reveal a novel mechanism by which the loss of this enzyme protects against bacterial sepsis. “We found that mice that had the gene Ggta1 removed, mimicking the loss of the enzyme that produces α-Gal in humans, are better protected against systemic infections by bacteria that lead to sepsis. This occurs via the loss of the α-Gal glycan from the structure of some antibodies (IgG), a change that enhances their effector function”, states Sumnima Singh, the first author of the study. “The results we obtained suggest that enhanced IgG effector function probably increased resistance to a broad spectrum of pathogens, even when these do not express α-Gal”, adds Sumnima.