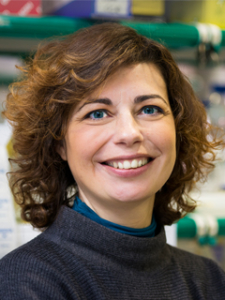 Mónica Bettencourt-Dias is a biochemist and cellular biologist, who is the head of the Cell Cycle Regulation Research Group.

Her research involves cell cycle regulation, for which she has been recognized as the recipient of the Pfizer Award for Basic Research, the Keith Porter Prizer from the American Society for Cell Biology and the Eppendorf Young European Investigator Award.

She was also selected as a 2009 European Molecular Biology Organization Young Investigator Fellow and inducted as a member of the EMBO in 2015.

Mónica Bettencourt-Dias is the Scientific Diretor of the Instituto Gulbenkian de Ciência since February 2018.