We are a watery planet. The ocean covers about seventy percent of the earth and supports life as we know it. It’s the blue heart of our ecosystem. Half the oxygen we breathe comes from the ocean. It plays a critical role in climate regulation, food provisioning and people’s livelihoods. It also offers many other benefits which help make life worth living for us all, from the beauty of a seascape to the thrill of underwater creatures or surfing the waves.

But pressures on the ocean including climate change, pollution, habitat destruction and over-fishing are immense and growing. There has been a fifty percent decline in marine biodiversity over the past forty years. The need to increase the effectiveness of conservation is urgent. The consequences of not doing so will impact on everyone, but soonest and hardest on those who have least.

The ocean has been a priority area for us for almost a decade as we recognise that ocean action = climate action. In 2013, we published research which highlighted an opportunity to improve the flow of information within and beyond the marine sector, make knowledge more accessible, and engage wider audiences with ocean health. As a result, Valuing the Ocean was established in 2014 and focuses on improving cross-sector collaboration and communicating the value of the ocean to influence long-term change.

Our theory of change

Our hypothesis is twofold. One, that people will act to protect what they value. Two, that to bring about significant change we need an ecosystem of organisations with different skills and interests working together. Our hypothesis is underpinned by a model for systemic change. 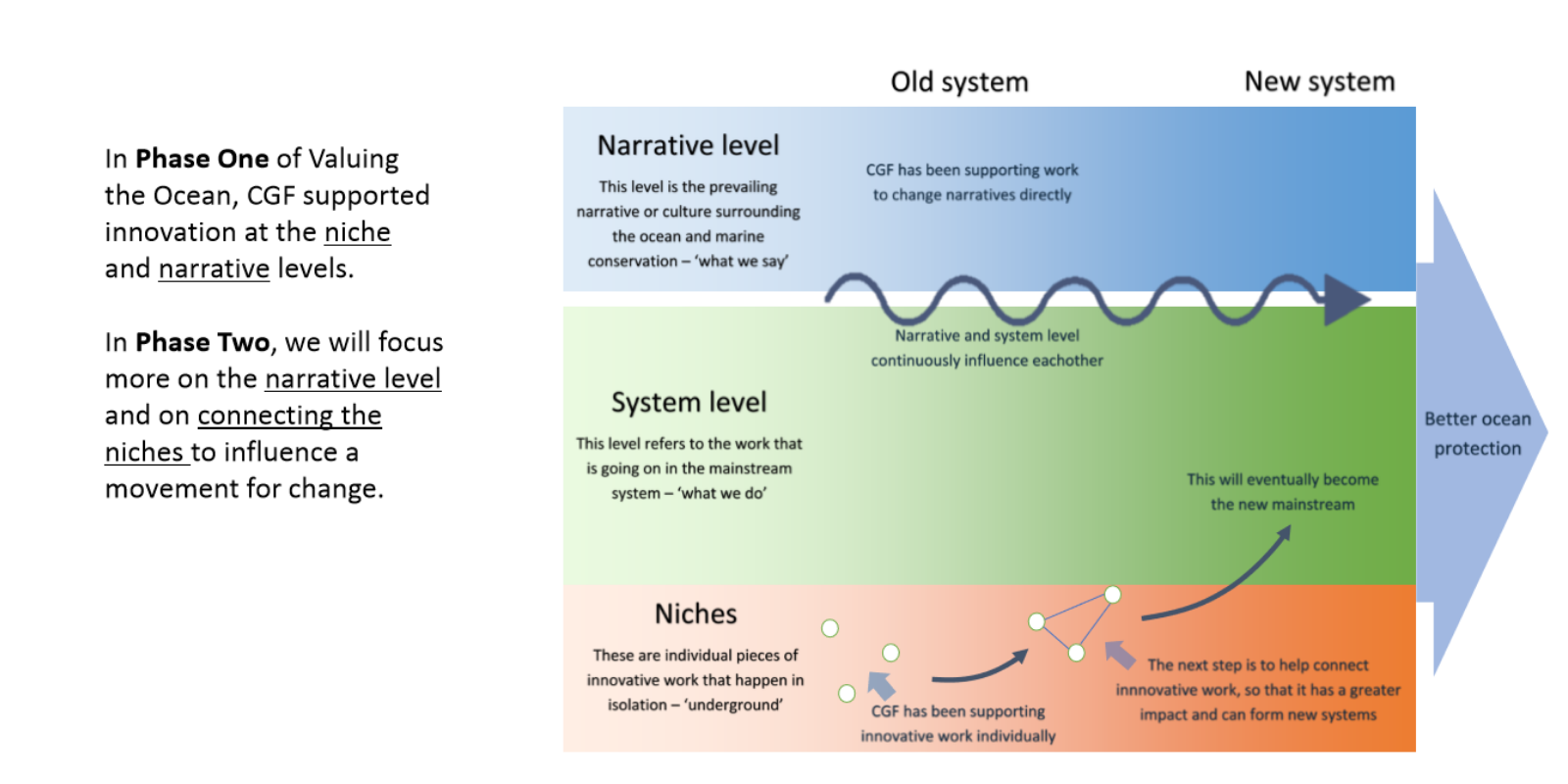 We focus our attention on four key areas of intervention.

We believe that through working collaboratively, people can achieve more than the sum of their parts: we learn from each other, bring together different skills, experience and priorities, and work creatively to find new solutions. The impact is multiplied and more likely to be game-changing.

Our flagship initiative for this programme is the Marine CoLABoration, a coalition of nine NGOs which experiment together.

Through Valuing the Ocean we have been supporting organisations to test new ways of communicating why the ocean matters to help build communications capacity and create a new ‘sea story’ in the UK. Our focus has been both on the framing of messages and the means of engaging people, for example, through support for the Marine Conservation Society’s Community Voice Method approach and the Marine CoLAB’s #OneLess campaign, and most recently On Road Media’s projects to reach new audiences about ocean health through media and influencers. We also support several projects that encourage journalists to report on ocean health effectively, including Sparknews and the Earth Journalism Network.

Valuing the Ocean has supported new approaches to engaging with people on marine protection issues in local communities, particularly in local coastal communities. This is not so much about championing conservation measures. It’s more about exploring what matters to people and how this can feed into more equitable and inclusive decision-making. It’s about building consensus and a shared appreciation of the value of the marine environment for local prosperity and wellbeing. It’s about connecting people to practical activity that can influence wider policy and practice. Examples include the New Economics Foundations’ Blue New Deal initiative and Surfers Against Sewage’s Plastic Free Parliament campaign.

4. Collaborating beyond the UK

Sustainable management and protection of the ocean depends by its very nature on effective collaboration beyond UK Waters. From its inception, Valuing the Ocean has always had an international scope, working alongside the Gulbenkian Oceans Initiative.

Since 2019, Valuing the Ocean has expanded its strategy to focus more explicitly on an international dimension for its work. For example, we have supported Funding Fish and the Natural Capital Coalition.

Effective communications, engagement and collaboration are key ingredients to a more sustainable and fairer future. Through our programmes, the UK Branch and partners have produced research, campaign toolkits and strategic guidance that could benefit others. These are available in our learning hub, aimed at practitioners who want to use the latest evidence and tools to deepen understanding and engagement with climate-ocean issues, and strengthen their impact through collaboration.

Over the years, the UK Branch has partnered to produce video campaigns to tell the stories of the projects we support and to serve as learning resources for more effective and accessible communications.

Some of the projects we support

Ocean Literacy – We Are Ocean 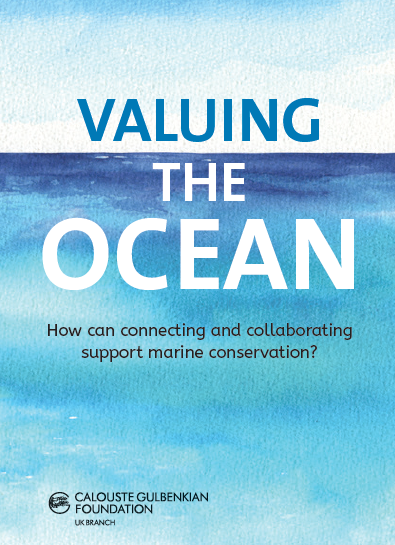