#OneLess is an experimental project which emerged from the Marine CoLABoration in 2016, with the purpose of ridding London of single-use plastic water bottles by 2021.

The average adult Londoner throws away 175 plastic water bottles a year – over a billion city-wide – with many ending up in the Thames. The #OneLess campaign aims to tackle this problem and increase citizens’ sense of connection to the sea. The ambition is to usher in a refill culture, where refillable water bottles are the new norm and single-use bottled water is a thing of the past.

In only two years #OneLess has become a rapidly growing movement of individuals, communities, NGOs, businesses and policymakers taking the pledge to go ‘#OneLess’ and championing London’s ‘refill’ culture.

Its strategy takes a holistic or systemic approach to change, identifying key levers in policy, infrastructure, innovation and public engagement to catalyse change. National museums, West End theatres and iconic sports venues are among the many institutions actively engaging with the project. Policymakers are interested too: Parliament has agreed to go plastic free; the Mayor of London is implementing a network of 20 water fountains around the city.

In 2018 the #OneLess Design Fellowship worked with creatives, technologists, urbanists and planners to develop and design innovative solutions to drive the refill revolution. Their solutions were showcased during London Design Festival in September 2018. The best concepts and prototypes will be tested during a period of trialling and monitoring.

In August 2021, #OneLess published its ‘Practical guide for tackling ocean pollution at source’ toolkit, which sets out how the campaign has catalysed change at multiple levels across the ‘hydration system’ in London in collaboration with other partners. Using a systems change and values-based approach, #OneLess has influenced policy, improved drinking water infrastructure and increased investment in alternatives, working with businesses across the capital, and connecting Londoners to the value of the ocean. As a result, the Mayor of London has committed £5 million to refill infrastructure; #OneLess Pioneer Network members have removed more than 5 million single-use plastic water bottles and 9 million single-use plastic items from their operations; and so far, the equivalent of 829,000 water bottles have been dispensed from newly installed drinking fountains. 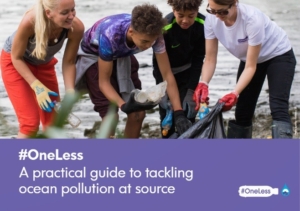