The power of participation in the performing arts

We want to widen participation in the performing arts to people from all walks of life, especially from the most vulnerable and under served communities

Opening up the performing arts for everyone is what this strand of work was all about. Research has shown that participating in groups such as your local choir or theatre group develops new skills and knowledge, builds richer social networks and boosts confidence. In a study by the Scottish Government (1), regular participants in a creative or cultural activity were 38% more likely to report good health.

And these experiences are even more meaningful for the most vulnerable and underserved in our communities, such as people living in poverty, people with learning and physical disabilities, prisoners and ex-prisoners, the homeless and older people in care homes. But sadly, these groups rarely participate. This robs them of the opportunity for self-expression, to developing critical life skills and forge closer social connections. And it robs audiences from hearing stories about a diverse range of life experiences.

Our long-term aim has been to see performing arts include people from every part of society, to give a platform to the voices that are seldom heard and to enrich artistic works with authentic lived experiences.

We consider the development of participatory practice as central to making work that combines these artistic and social outcomes. This work aimed to bring participatory performing arts into the mainstream.

What do we mean by “participatory performing arts?”

“Participatory performing arts” involve non-professionals doing things like acting, singing and dancing. And when we use this phrase we are especially interested in helping vulnerable groups participate in a way which brings them joy. In participatory performing arts taking part is as important as the final performance because when done well the creative process allows people to discover their strengths, gain confidence and develop a positive self-image.

We supported a consortia of 10 organisations to undertake innovative projects as part of our Sharing the Stage programme that take risks in order to explore new ways of thinking and working that will benefit the arts sector and society. From a writing festival of playwright prisoners, to older people in care homes acting alongside professional actors, to musicians with disabilities playing instruments which were designed for them, these projects are diverse and push boundaries. These performances took place between 2016 and 2018 and were filmed by the Foundation (films to be released in early 2019). An evaluation report will be released in early 2019.

Representatives from our 10 partners also come together as a learning community to share practice and discuss creative solutions to the pressing questions facing arts organisations developing participatory work. Topics such as artistic and social values, collaborations with the social sector and the representation of marginalised experiences in mainstream. Since 2017 the Sharing the Stage Learning Community has been a self-managing group.

Broadly, we will have succeeded if we can create:

Who did we work with?

Below are the 10 consortia which the Foundation has funded and supported through our Sharing the Stage work. The consortia was put together through an open call.

Giving a platform for local women’s voices that are seldom heard, this project explored memory, place and the passing of time. Turn was a year-long community project culminating in performances over one lunar month at low tide from a derelict shipyard site.

Focusing on widening young people's aspirations through participation in the arts, this project brought together 40 young people not in education, employment or training (NEET) from North Manchester. The consortium developed a spectacular large-scale site-specific production combining digital arts and aerial performance, for touring in 2018.

Rising to the challenge of demonstrating the impact of arts engagement in improving recovery rates, this project created an ensemble of adults recovering from substance misuse, through collaboration with two recovery agencies. The project established the ensemble as an independent entity who will continue to create and perform.

Challenging the perceptions of older people in society and in the arts, this project focused on transforming older people's memories into an ambitious new work. The cast included older people and actors performing together.

Exploring the issues of physical fitness on rehabilitation, this project highlighted the often forgotten casualties of war. Deaf and disabled ex-veterans were trained in theatre and aerial performance to develop a powerful commemoration for the soldiers who were disabled during the World Wars and later lost their lives.

Exploring the power of activism through music, sport and 'place', this project aimed to bring together the under-represented communities of West Newcastle. Drawing on models of Assembly performance the project created a large-scale festival production including an orchestral piece to be performed at Premiere League matches.

Focusing on the transition between life in and outside of prison, this new writing festival of plays brought the voices of prisoners and ex-prisoners into the mainstream, to create access to high quality artistic experience for participants, and for audiences to engage with the criminal justice system.

Empowering marginalised young men through creativity and activism, this ground-breaking multi-art form project focused on creating agents for positive change in society. We supported the 'Boot Camp' phase where participants were trained to explore the social, political and media dimensions of our lives to inspire a movement.

Driven by the need to create inclusive participation and performance opportunities for disabled musicians, this project enabled a range of people with physical and learning disabilities to collaborate, create and perform. Digital tools to support ongoing music making and a touring programme will be lasting legacies.

With One Voice began as a project we supported in 2012, when together with StreetWise Opera we put on an event at the Royal Opera House with approximately 300 performers who have experienced homelessness. In 2016, With One Voice was officially launched as an international movement, at the culmination of a week-long festival of homeless performing arts projects in Rio de Janeiro at the Cultural Olympiad.

Supporting NESTA in the evaluation of the Arts Ventures Fund and the impact analysis of the ventures supported through it. The pilot fund tested the proposition that access to appropriate investment would enable arts organisations to build their capacity for social impact and income generation.

A two-year programme of work with the London International Festival of Theatre that saw world-class artists from across the globe working alongside non-professionals in the deprived areas of Tottenham to redefine excellence in participatory practice and provide transformative opportunities for participants, audiences, artists and local organisations. 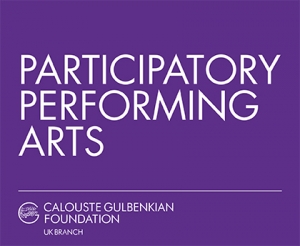