Calouste Sarkis Gulbenkian (1869-1955) was a business man, art collector and philanthropist of Armenian origin, born in the Ottoman Empire. 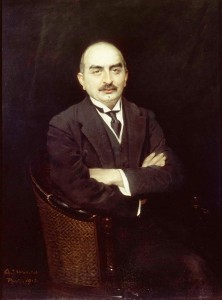 Bringing Eastern and Western cultures together, Gulbenkian was above all a “business architect”. Due to his vision, his contacts and persuasive skills, Gulbenkian played a decisive role in the first half of the twentieth century mediating international negotiations that led to the exploitation of the exceptionally rich oil fields in Al-Jazeera (Iraq). Throughout his life, he assembled an eclectic and unique collection that was influenced by his travels and his personal taste.
Gulbenkian took British citizenship in 1902 and died in 1955, in Lisbon, where he spent his last years and established in his will an international foundation that would bear his name and act so as to benefit the whole of humanity.