Over the last five years, the Calouste Gulbenkian Foundation’s (UK Branch) Transitions in Later Life programme has commissioned new research, tested therapeutic interventions and worked to increase awareness of the need to support people in mid-life to manage later life transitions. We reflect on the impact of the programme and the key learning.

From firefighting to prevention

Our work on later life transitions grew out of the Foundation’s earlier work on increasing social connections and social support in later life. This includes helping to found The Campaign to End Loneliness, which has increased awareness of loneliness and its impact on health.

In 2014, we began to think about loneliness in terms of prevention rather than cure. Our work on loneliness had revealed that chronically lonely older people have often suffered setbacks or life changes that they have found overwhelming, such as retirement, bereavement, or becoming a carer. We decided to investigate ways of supporting people to manage these difficult life events.

To explore the issue of later life transitions we undertook a substantive amount of research. Initial scoping highlighted the importance of addressing the emotional and psychological aspects of the transitions that people usually face in later life. However, it noted that the support available to people was patchy and often only accessible in a crisis.

Our research and consultation phase showed the need to shift from firefighting to prevention and from disjointed to holistic, person-centred approaches. Against a backdrop of reduced state spending, we also recognised the need to involve others in the delivery of new services and  identified employers as an important stakeholder in the work.

“Our research showed the need to shift from firefighting to prevention and from disjointed to holistic, person-centred approaches.” 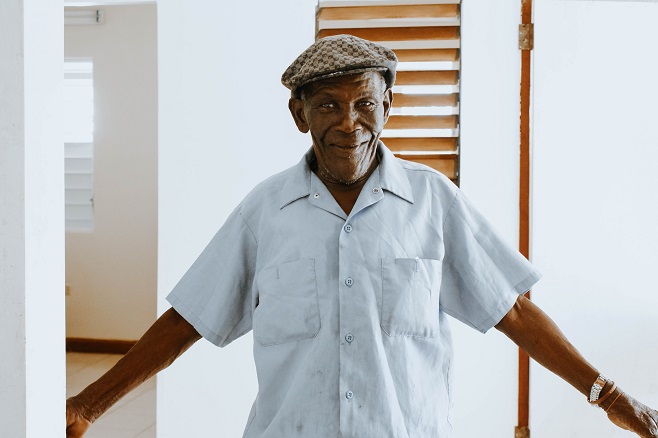 Our ambition is for an approach that future-proofs health and social issues in later life.

Transitions in Later Life (2014-19) was the first funding programme of its kind in the UK to concentrate on improving how people are supported ahead of retirement in more holistic and therapeutic ways. Our long-term aim has been reduced loneliness in later life, with people in mid-life becoming happier, more resilient and better supported to respond positively to change. The decision was made to conceptualise life events as ‘transitions’ to encourage people to begin to see these events as emotional processes that they undergo and can emerge from. In mid-2016, the Centre for Ageing Better joined the programme as our learning and evaluation partner.

“Life events were conceptualised as ‘transitions’ to encourage people to see these events as emotional processes that they undergo and can emerge from.”

We wanted to investigate what works in supporting people around the time they retire and how therapeutic techniques can help build resilience of people aged 50+.  In 2015, we put out an open call for pre-retirement initiatives that build wellbeing.

Seven organisations were selected to test new group-based psychological interventions that use tools such as Mindfulness training, Cognitive Behavioural Therapy and Positive Psychology. While the projects differed in aims, content and delivery style, and target groups for participation, they shared a common aim to facilitate a better transition into later life.

A summary of each pilot programme is provided below:

An Irish national organisation which inspires and empowers people to live healthy and fulfilling lives, with a goal of turning the period from age 50 onwards into one of the most satisfying times of life. Age & Opportunity developed and tested a new programme (including materials and a range of delivery methodologies) to build resilience in people aged 50+ to enable them to navigate later life transitions.

The Beth Johnson Foundation is a development organisation based in North Staffordshire that seeks to test new approaches for improving the quality of life for people as they age. It trains volunteer peer coaches in Cognitive Behavioural Therapy (CBT) and mindfulness techniques which they will use themselves and also cascade out to the wider population of older people.

Ageing without Children (AWOC) partnered with the Beth Johnson Foundation on a TiLL project in 2016. AWOC campaign and provide information to support people over the age of 50 without adult children, including research into the needs and experiences of people ageing without children and running of an online community.

The Centre for Policy on Ageing explores partnerships which view transitions as part of its strategic mission to delivering experiential courses to
mid-life peers based on real-life storytelling and coaching to develop emotional resilience and self-direction. The course culminates in a celebration of new
ideas for making the most of the 50+ years and a methodology for identifying opportunities for this locally.

To improve the mental and emotional wellbeing and resilience of their staff, CWP runs a practical and thought provoking two-day, person-led workshop aimed at NHS support staff aged between 50 and 75. The workshop provides tools and techniques to increase wellbeing, identify positive emotion, maintain positive relationships, and develop meaning and a sense of accomplishment.

A locally based mental health charity delivering a range of interventions to alleviate some of the key risk factors for poor mental health. Manchester Mind delivers six week interventions based on positive psychology and CBT to equip participants with specific skills that are proven to improve people’s mental wellbeing and develop resilience.

Positive Ageing and Resilience Training (PART) is a programme from Guy Robertson of Positive Ageing Associates with Miriam Akhtar of Positive Psychology Training. The eight-module course focuses on the emotional and psychological aspects of ageing with the intended outcome of enabling older people to increase their resilience to the challenges of later life.

A national voluntary sector provider of adult education in workplaces and communities across Scotland. Its project incorporates mindfulness and creative approaches, including reflective and expressive writing and nature connection to enhance health and wellbeing. This work is delivered through Employer Wellbeing Awareness Raising sessions, participant taster sessions, wellbeing courses and the formation of participant groups.

“Seven pilot programmes testing group-based psychological interventions made up the backbone of this strand of work.”

A community of learning

To enhance the impact of the interventions, we brought the cohort of organisations together as a learning community three times a year. This provided a space to share practice, develop new approaches and share insights that emerged over the course of project delivery. Citizens Advice and Tavistock Relationships were also part of this cohort. See the project summaries below:

Citizens Advice initially ran a Design Pioneer Programme to design five new services aimed at improving the finances,social inclusion and wellbeing of
people approaching or living in retirement. We worked with Citizens Advice on an in-depth research project that sought to understand what barriers people face when planning for later life, in advance of the state pension age.

Tavistock Relationships supports and improves the quality of couples’relationships by building resilience and strengthening the ability of the couple to act as a protective resource. Its project aims to develop a replicable pilot model for a preventative relationship ‘MOT’ check-up for 50+ couples, involving face-to-face sessions and a video addressing relevant issues. 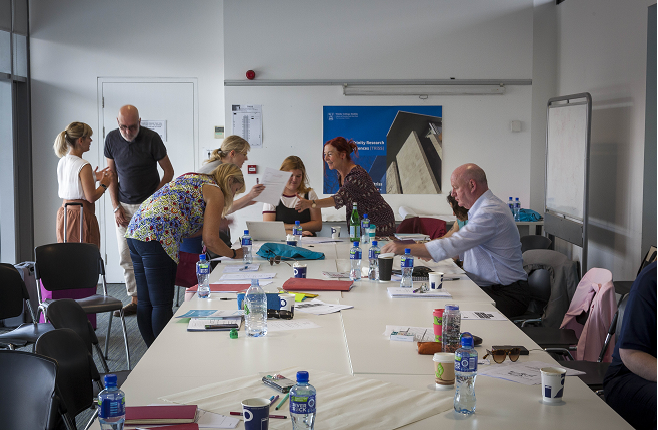 The TiLL learning community aims to advance practice, change attitudes to ageing and develop awareness of the importance of supporting people manage transitions into later life.

The pilots wrapped up in 2016 and were evaluated in mid-2017 by independent consultancy Brightpurpose. A final evaluation focusing on two of the courses — ‘Working Longer and Living Life to the Full’, run by Cheshire and Wirral Partnership (CWP) NHS Trust and ‘Changing Gears’, run by Age & Opportunity – was published in 2019.

The final report, Navigating Later Life Transitions, highlights the importance of providing support to employees in mid-life as a way of helping them stay in work for longer (if they want to), plan for retirement, and think ahead about their future needs. The specific benefits are outlined below.

“Participants on the courses had improved wellbeing, self-kindness, attitudes to retirement and attitudes to ageing that were sustained for up to six months.”

Case studies have proved a useful medium for telling the story of which interventions are needed to support transitions in a more holistic way. Podcasts and short films allow project participants to speak about impact in their own words. These include Linda from CWP NHS Trust who explains how the course helped her to achieve a work-life balance. Blogs reveal the perspectives of those who designed and ran the interventions and the participants on the courses.

Building the evidence base

In addition to the seven pilot programmes, we commissioned new research, including the Centre for Public Impact’s review of international policies that ease later life transitions (2018). It revealed that our focus on resilience and wellbeing is unique, uncovering an international gap in holistic support.

“A review of international policies that ease later life transitions revealed that our focus on resilience and wellbeing is unique.”

Our 2018 report with the Royal Society for Public Health (RPSH), ‘That Age Old Question‘ (2018), revealed prejudices against ageing across generations and highlighted how internalised ageist stereotypes harm our health.  The report received considerable coverage in print, online and broadcast media.

Our 2018 ‘Thinking Ahead’ report with the Centre for Ageing Better explored support provided by employers to help staff plan for their future. It found that most employers offer staff single-issue pre-retirement support, and called for a more holistic ‘mid-life review’.

“The ‘Thinking Ahead’ report found that most employers offer staff single-issue pre-retirement support, and called for a more holistic ‘mid-life review’.”

Looking Forward: attitudes to later life (2018), published in partnership with Citizens Advice, uncovers the attitudes of people in their 50s and 60s towards later life. The aim was to understand how people who have not reached retirement age feel about getting older, and the extent to which they had planned for the future.

Planning for the future

Following the success of CWP’s course, the Trust is now looking to expand its pilot course for older workers across the NHS, the fifth largest employer in the world.

“Cheshire and Wirral Partnership NHS Trust is looking to expand its pilot course for older workers across the NHS.”

In 2019, we supported CWP to deliver a short ‘masterclass’ for 200 NHS staff at an event run by NHS Improvement, the body responsible for NHS trusts and independent providers and their continuous improvement. This masterclass informed trusts of its TiLL-style courses for staff, and enabled CWP to offer training and/or delivery of this work in other trusts.

We are now supporting CWP (in partnership with the Centre for Ageing Better) to expand its capacity to meet demand arising from the masterclass. CWP aims to reach either through delivering workshops directly or through trusts sending trainers on its train-the-trainer programme. 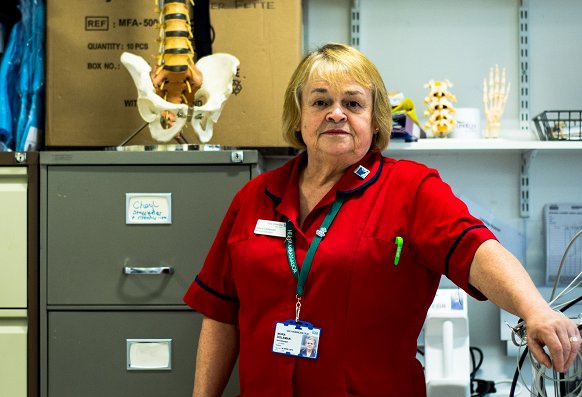 Nora is an NHS nurse who took part in a course run by CWP and featured in one of our case study films.

We will continue to support the Centre for Ageing Better to disseminate and cement the learning from the Transitions programme and ensure its impact continues to be felt.

Thank you to all who have made this work possible and who continue to work towards ‘future-proofing’ health and social issues in later life.