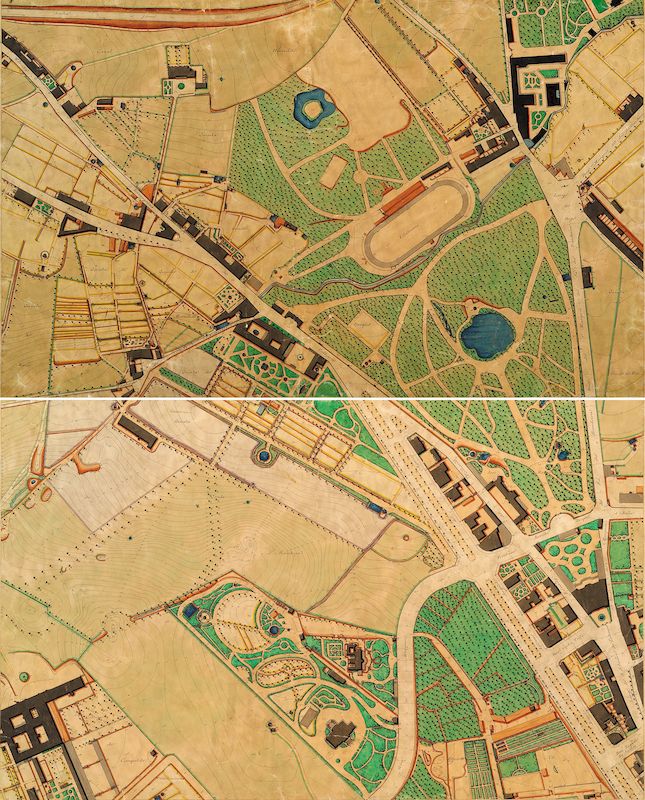 In this topographic blueprintby Silva Pinto, published in 1909, the changes made by José Maria Eugénio de Almeida to the former Quinta do Provedor can be seen.

–  the existence of the trapezoidal shape already evident in the Quinta do Provedor;

–  the definition of the northern boundary by the Rêgo trench;

– the new boundary to the south, in relation to that recorded in 1801, matching the representation made in the Topographic Chart of Filipe Folque [i].

– the four entrances of the park are referenced: one to the south, in front of the palace, in the symmetry axis defined by the U-shaped blueprint that the building presents; another with access to the stables; another to Rua de Palhavã; and another to Rego.

– the definition of an axis that structures the garden design and connects the park with the architecture of the S. Sebastião Palace;

– the creation of a network of curvilinear secondary paths with different hierarchies that define an irregular mesh directed towards the lake;

– the presence, near the lake, of a lookout lookout that finishes the main axis;

– the creation of an irregularly shaped lake, the heart of the project, punctuated by a tiny island and fed by a small stream;

– A scenographic dramatization, picturesque, exotic, determined by the layout, vegetation, Gothic language of the stables and the wall that delimits the park;

The construction of the Santa Gertrudes Park took place between 1866 and 1870.

In these three years, Jacob Weiss designed the paths and prepared the lands for the planting of:

These trees and shrubs were acquired from Horticulture Cordier – Pepinieriste à Berney (Eure) – in France and arrived at S. Sebastião da Pedreira on January 8, 1867.

Between March 1867 and November 1867, the lake and its rocks were constructed. The stones for the construction came from Monsanto [iii].

[i] Fernando Larre Farm – in Topographic Atlas of Lisbon No. 1

Fernando Larre Farm – in Topographic Atlas of Lisbon No. 4