We gathered at Trinity Buoy Wharf in the London Docklands on the bank of the tidal Thames. The choice of location was deliberate. We would be spending the day discussing the various values of the ocean, so we wanted people to feel – physically, emotionally and historically – connected to the sea. Here once upon a time was the largest port in the world: for centuries, it connected Britain to the rest of the globe and the nation’s prosperity depended on it.

The aim of The Ocean Connects Us was to explore ways of communicating the value of the ocean effectively, sharing what’s working well and potentially seeding new ideas and collaborations. We also wanted to launch Getting Below the Surface, new research commissioned from the FrameWorks Institute into how the UK public thinks about ocean issues. 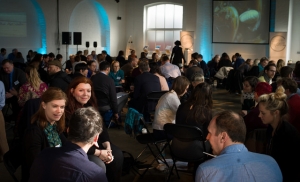 Our UK Trustee, Martin Essayan, opened the day, outlining the priorities of CGF’s marine work in the UK and Portugal. He also reported back the results of a pre-event survey of participants’ views on key messages and challenges for ocean conservation. 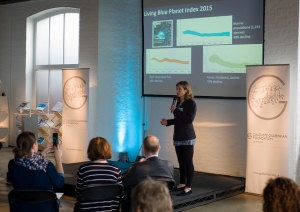 Dr Heather Koldewey, Head of Marine and Freshwater Conservation Programmes at the Zoological Society of London and a Marine CoLAB member, then spoke about the importance of #OceanOptimism in our approach to conservation and the value she’s found in experimenting with the CoLAB.

What followed was a series of participatory sessions expertly designed and facilitated by FoAM Director Maja Kuzmanovic. In pairs, we shared a memory of the ocean to begin thinking about the different ways we connect to it on a personal level. In small groups, we then offered an example of a current or completed project which involved working together to communicate the value of the ocean, or more generally to improve the health of the ocean.

The projects were discussed and visually mapped. We began to see how collaborations related to each other, and an emerging landscape of challenges, questions and hypotheses. [We will be able to share a map of all these projects shortly.] 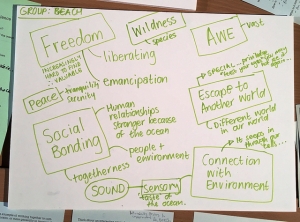 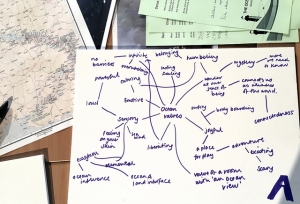 Lunch was an opportunity to experience the value of the ocean through art. ‘Dark Years Away’, a video installation by artist Mariele Neudecker, explored the idea of the deep sea as the final frontier of knowledge, using footage taken by the Nekton Foundation’s underwater submersible. London’s only lighthouse, which forms part of the Trinity Buoy Wharf venue, was opened specially for participants. As well as providing lovely views of the Thames, it houses LongPlayer, a music installation that has been designed to play without repetition until 2999 – and which received early funding from Gulbenkian. Well, we believe foundations should try to take a longer view… 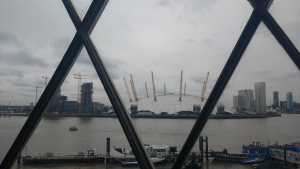 The view from London’s Only Lighthouse in Trinity Buoy Wharf, looking across the Thames to the o2 Dome

After lunch, poet John Wedgwood-Clarke and sound artist Rob Mackay introduced an audio piece specially commissioned for the day, which included sound recordings from the Thames environment around Trinity Buoy Wharf. The piece was curated by Invisible Dust and inspired by a similar site specific work which, along with Mariele Neudeker’s work, will be included in Invisible Dust’s  ‘Offshore: Artists Explore The Sea’ exhibition opening in Hull City of Culture in April.

Dr Moira O’Neil from the FrameWorks Institute then launched ‘Getting Below the Surface: Mapping the Gaps between Expert and Public Understandings of the Ocean and Marine Conservation in the United Kingdom’. The report identifies a series of more and less helpful ‘frames’ for public understanding of marine issues and offers some ideas about how to optimise more useful approaches. Moira illustrated the importance of strategic framing and recognising that, in her words: “There is a story going on about your issue, whether you are telling it or not.”

Afternoon participatory sessions aimed to put some of the FrameWorks findings into practise. Each group nominated one of the projects identified in the morning sessions to work on. Informed by the research findings, the groups wrote a set of suggestions for each project, as well as recommendations that could be more widely applicable.

Finally, we heard from Henry Green, Project lead for the Foresight Future of the Sea project, who spoke about the value of government foresight activities and the aims of the ocean research he is leading.

The formal part of The Ocean Connects Us ended with a quick collaborative experiment, where the participants created and improvised a short vocal composition, based on messages they’d like to take away from the event. You can listen to it here >

The day of connecting and communicating was almost at an end, all bar the drinks and canapes and further conversations. Much was discussed and we are still sifting through and synthesising all the ideas and reflections and materials produced. We will be updating on this shortly. In the meantime, do have a look at FoAM’s summary on the Marine CoLAB wiki site. 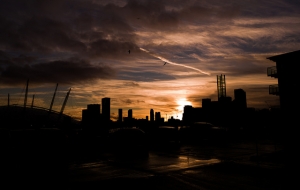