Artists explore our connection to the ocean in new major exhibition

’Offshore: artists explore the sea’ will open tomorrow in Hull, which was once home to the third largest port in the world.

The exhibition will include new and existing works by internationally-renowned artists, some of whom worked with marine biologists and ecologists to inform and influence their work.

Curated by Invisible Dust this will be the first joint exhibition between Ferens Art Gallery and Hull Maritime Museum, meaning the audience will be able to view art in the gallery and then objects such as whale bones and ships models in the museum. 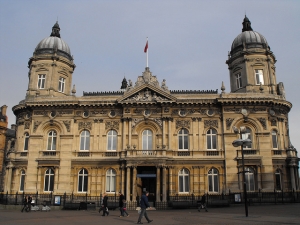 Hull has a strong connection to the ocean. It has traded commercially with Scandinavia for centuries, including whaling in the 19th century. It was once home to the third largest port in the world and many of the city’s ornate Victorian buildings relate to the maritime industry.

Delegates at The Ocean Connects Us event in March got a sneak peek of some of the Invisible Dust work. We saw  Mariele Neudecker’s video installation which explores the deep sea as the final frontier of knowledge, and listened to an audio piece made by poet John Wedgwood-Clarke and sound artist Rob Mackay which featured recordings from the Thames.

’Offshore: artists explore the sea’ will run until the 28th August 2017.

The UK Branch is proud to support Sounding the Sea, a symposium relating to this exhibition which will take place on 15 and 16 June. It will see scientists, artists, poets and historians examine our connection to the ocean through talks, film screenings and breakout sessions. You can buy tickets here.