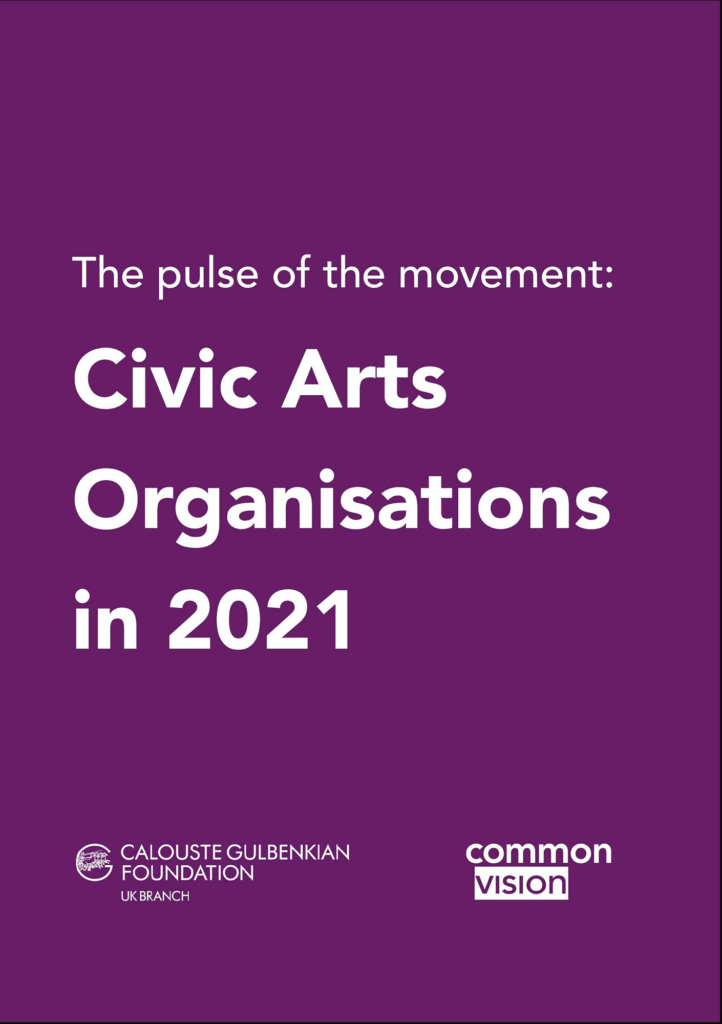 In 2020 and 2021, many arts organisations flexed and adapted to better support their communities and assume a critical role in society.

Applications for the Award for Civic Arts Organisations, launched in 2020, tell us about the growing movement of civic arts organisations in the UK. A total of 424 organisations of all sizes and art forms applied in the first two years. The stories the organisations shared tell us of an extraordinarily resilient sector that showed heightened creativity and capacity to respond to the immense challenges that marked this period of disruption.

The pulse of the movement: Civic Arts Organisations in 2021 is a new report by Common Vision, commissioned by the Calouste Gulbenkian Foundation (UK Branch). We wanted to better understand who is doing what in the UK, and where the ‘civic role movement’ can be further developed. The report analysed open and closed text responses from the Award applicants, which provide insight on the landscape and how arts organisations responded to community needs during a critical period.

We learnt that organisations are at different stages in the civic role journey. Many applications came from organisations for whom playing a civic role and using co-creation methods have been their bread and butter. Yet many applicants had taken their first steps in this direction, and the pandemic had a transformative impact: 99% said they would not have conducted this work had it not occurred. Nearly all organisations, 32% of which were large in size*, said they plan to amplify this work and to make civic engagement a key element of their strategy.

Community wellbeing and participant capacity building were the predominant drivers of organisations’ work. 95% described improved wellbeing as an impact – a clear indication of the role arts organisations played during the pandemic. 85% said participants’ skills, knowledge or capabilities were enhanced by the work.

The applications also highlight that arts organisations are actively considering power and representation. Outreach and inclusivity were priorities for applicants – principles which were identified as core to civic arts organisations in our 2017 Rethinking Relationships report. What this looks like in day-to-day operations has evolved: many Award applicants turned inwards to consider representation and equity within their own organisations, as well as advocacy outwards.

Co-creation is becoming widespread: as a model for engagement and organisational design, it was the distinguishing feature of the shortlisted and awarded organisations. 40% of all applications described co-production methods.

How can the movement evolve?

Award applicants set out big plans for the future, seeking to embed and amplify their work for the benefit of the sector and their wider communities. Their stories show us the civic arts movement is a hotbed of social change and paint an optimistic picture:

In a time where the initial optimism and sense of shared purpose and community experienced during the pandemic have waned, civic arts organisations are ever more relevant. Communities around the UK face great challenges – from the cost of living crisis to climate change – but there are opportunities for ambition, imagination and civic transformation. The civic arts movement has a role to play in catalysing this transition.

The third edition of the Award will be launched this Autumn. It will celebrate organisations that are looking forward and focused on building a better, resilient, and sustainable future where creativity helps communities thrive.