Poets have long been stargazers, moved by the strange infinities of the universe to translate them into metaphor and song. But what do they know of the science of astronomy? And what do astronomers know of poetry?

For Dark Matter, the third in its trilogy of poetry and science anthologies, the Gulbenkian Foundation commissioned leading international poets to create new work inspired by their discussions with space scientists. The collaborations were brokered by poet Maurice Riordan and the eminent cosmologist Dame Jocelyn Bell Burnell (who as a post-graduate student was involved in the discovery of pulsars). 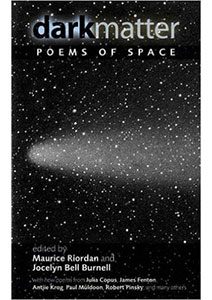 Dame Jocelyn has long harboured a passion for poetry. She says: ‘When I started “collecting” poetry with an astronomical theme some twenty years ago, I kept very quiet about my hobby. It is only in the last few years that I have dared to “come out” so it has been heartening that so many of my colleagues have been so willing to take part in this unusual exercise, as well as delightful to see the results of the collaborations.’

The poets have also responded to the challenge – and in characteristically diverse ways. Paul Muldoon offers a jaunty villanelle on Cleopatra’s asp and the expanding universe. John Kinsella reflects on the light echo of supernova 1987A, inspired by David Malin’s extraordinary photographs of the night sky. The South African writer Antjie Krog has recreated the symmetry of the HH212 gas jet, while Deryn Rees-Jones has transposed her poem into Morse code, which written down, she says, looks ‘like a depiction of a night sky busy with stars’.

‘Some have expressed scepticism about the possibility of any artist learning anything at all from a skimming visit to a boffin in a research facility,’ says Siân Ede, Director of the Arts Programme at the Gulbenkian. ‘I disagree. Poets are entitled to be snappers-up of unconsidered trifles, but they are no fools and who could not be intrigued by the profound implications of space science, its big bangs and phase transitions, its black holes and collapsed stars? These seem to be pertinent to our very existence and we must struggle with our grasp of them just as we might expect scientists to respect the profound historical knowledge and rigour required in writing good poetry.’

For the poets, initial bewilderment was soon replaced by a sense of awe and of recognition. ‘You sweep the skies looking for something that makes sense of the universe,’ says the poet Neil Rollinson, ‘and eventually you find it, or you find parts of it, or you find more questions, which seems to be what happens when you write poems. We’re in the same business. We’re just trying to find out what we are and what makes us tick. What the hell the universe is all about.’