An artist’s residency on the Galapagos Islands was far from a booby prize for British installation artist, Marcus Coates, whose three week trip inspired him to make three films as well as dressing up as native bird, the blue footed booby, for local television.

‘There was a serious point, as well as humour, in examining things from the perspective of such a colourfully, comic bird as the booby,’ he said. ‘It was like visiting another planet, where you couldn’t help but reconsider our species and its effect on this planet.

‘People think of the Galapagos as an uninhabited place. It’s not, more than 20,000 people live there. It was fascinating to spend time with the communities living in the shadow of the famous natural history of the islands and witness the pressures and difficulties they face in ‘paradise’. I have come away with a lifetime’s worth of ideas and inspiration.’

Coates, who is also a keen ornithologist and naturalist, was taking part in the second artist’s residency in this three year project run by the Galapagos Conservation Trust and funded by the Calouste Gulbenkian Foundation.

Announcing that photographic and installation artist, Jyll Bradley and electro acoustic composer and musician, Kaffe Matthews, will be the next artists to take up residency on the archipelago, Galapagos Conservation Trust Chief Executive, Toni Darton said: 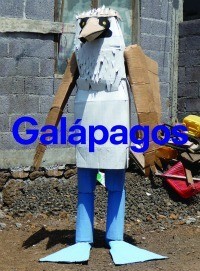 us conservation issues facing Galapagos and of celebrating the legacy of Charles Darwin in the bicentenary of his birth.

‘Each of the nine artists we choose in the coming months will work with scientists at the Charles Darwin Research Station on Santa Cruz island, and with the local communities on the inhabited islands.’

Kaffe Matthews, who is a pioneer in electronic improvisation and live site-specific sound works, has a degree in Zoology as well as music. Jyll Bradley, who was recently artist in residence at the Liverpool Botanic Collection, is particularly interested in the history and poetics of place, and in societies going through difficult periods of transition.

‘The Calouste Gulbenkian Foundation has worked with the Galapagos Conservation Trust to establish a robust and innovative programme to involve the islands’ scientists and local people through the medium of inventive art-making,’ said Andrew Barnett, Director. ‘This is one of the most ambitious arts projects we have been engaged with.’

Dorothy Cross, the first artist to visit Galapagos through the programme, has an exhibition inspired by her residency, running from 14 – 26 June at the Unitarian Church in Shrewsbury, where Darwin regularly worshipped as a child. She was joined in the residency by actor and childhood friend, Fiona Shaw.

‘Dorothy Cross and Fiona Shaw have energetically prepared the ground for other artists to follow, sensitive to the historical, political, social and environmental challenges currently facing the islands,’ said Andrew Barnett.