John Pearce
With a chapter by Alan Kay
2003

Social enterprises are businesses which are run for a social or environmental purpose, to deliver benefits to the community and not to generate profits for individuals or shareholders. They have a growing role to play in the British economy, not as a ‘cranky’ subset of the private sector but as part of a truly alternative economic system – a third way, distinct from both the private and the public systems of ownership and management.

A decade after the publication of his book At the Heart of the Community Economy, John Pearce looks at how the world of social enterprise has changed. The sector is now steadily growing, its contribution to the economy is more clearly recognised and it is being courted by government to play a key role in modernising and reforming public services. Pearce describes how social enterprise might come to dominate the economy of Anytown. He examines its key values and argues for a recognised legal status and an independent development and financing infrastructure. He demonstrates the social and environmental added value and outlines a five stage process of social accounting. A chapter by Alan Kay explores the importance of social capital to the formation, growth and sustainability of social enterprises and Pearce concludes with specific recommendations designed to speed the advance of the social economy generally.

‘… ideological, intellectual and controversial. This book is stimulating and informative and should be essential reading in development agencies, local authorities and universities.’

John Pearce has been involved in community-based development work for over 30 years. He runs his own consultancy – Community Enterprise Consultancy and Research – and is an active director of the Community Business Scotland Network and also associated with COMMACT (Commonwealth Association for Local Action and Economic Development) and the European Network for Economic Self-help and Local Development. Publications include At the Heart of the Community Economy: Community enterprise in a changing world (1993) and Centres for Curiosity and Imagination: When is a museum not a museum? (1996). 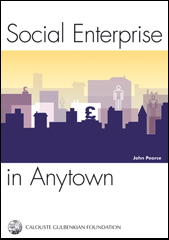