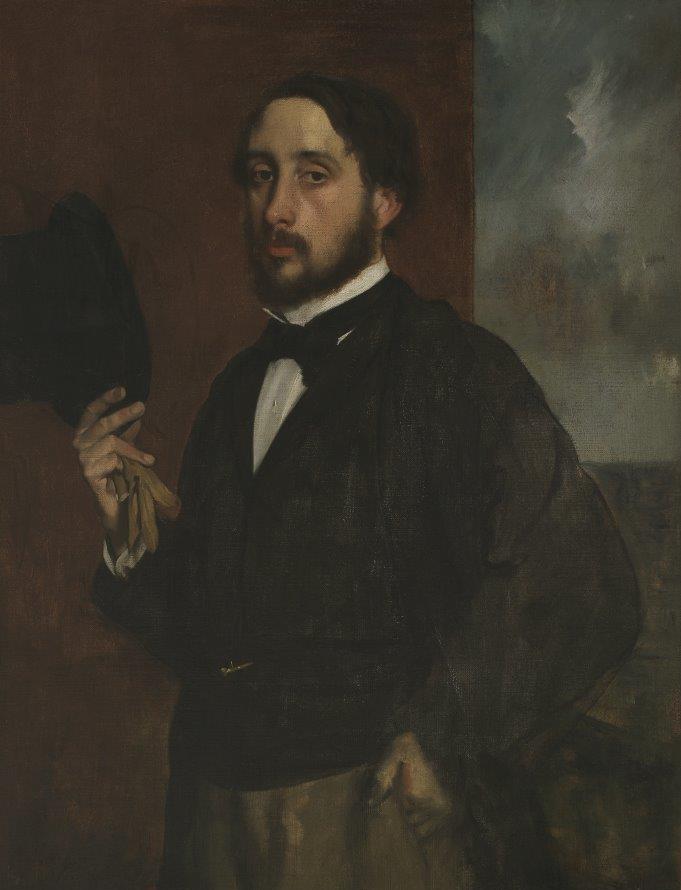 In the 1850s and ‘60s Edgar Degas painted fifteen self-portraits, of which only two, this painting and another work, are half-length depictions of the artist. The other painting in this format was the first major work to be produced by the artist. Known as Degas au porte-fusain (Museu d’Orsay, Paris), it was painted in 1855 and was inspired by Jean-Auguste-Dominique Ingres’ Portrait of the Artist (Musée Condé, Chantilly, 1804). A photograph taken of Degas (Bibliothèque National, Paris) in the first half of the 1860s confirms that the painting was produced around the same time, since he appears to be around thirty years oldin both works.

From the formal point of view, two significant references may be pointed out: while the pair of gloves suggests an obvious tribute to Titian, the background of the composition, which shows an interior space delineated by vertical lines opening out onto the landscapebehind, evokes the Renaissance portrait tradition. In this unfinished work, in which the correction of the drawing of the top hat is clearly visible, the painter, by sketching a salutation, places himself as the focus of attention, appearing as the personification of a man of his time, a cosmopolitan flaneur.

Jeanne Fèvre, niece of the artist, Nice. Acquired by Calouste Gulbenkian through André Weil in Paris on 28 October 1937.