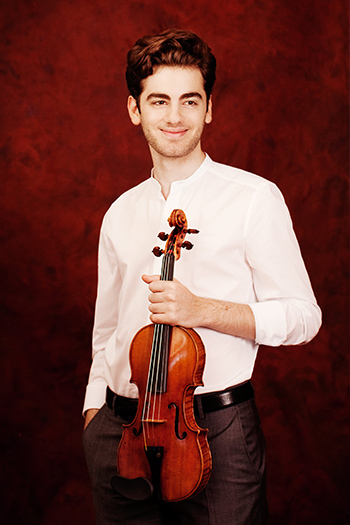 Since having received the award for the best interpretation of the Jean Sibelius Violin Concerto and having won second prize at the International Jean Sibelius Competition in 2015, Emmanuel Tjeknavorian has achieved international acclaim.

In 2018, Emmanuel Tjeknavorian will be part of the Orpheum Foundation and will give his debut with the Tonhalle Orchestra Zurich under Michael Sanderling.

The highlights of the 16/17 season included engagements with the Vienna Symphony, the Frankfurt Radio Symphony at the Easter Festival Warsaw, the Bruckner Orchestra Linz, the Camerata Salzburg and the Bogotá Youth Philharmonic Orchestra under the baton of Andrés Orozco-Estrada. Recital appearances included the Rheingau Music Festival, the Andermatt Classics, the Menuhin Festival Gstaad and the Festival Mecklenburg-Vorpommern’s cycle “young elite”.

Emmanuel had his first public appearance at the age of seven. Since 2011 he has been studying with Gerhard Schulz (Alban Berg Quartet) at the University for Music and Performing Arts Vienna.

Emmanuel Tjeknavorian plays an Antonio Stradivari violin (Cremona 1698), generously loaned to him by a patron of the Beare’s International Violin Society London.