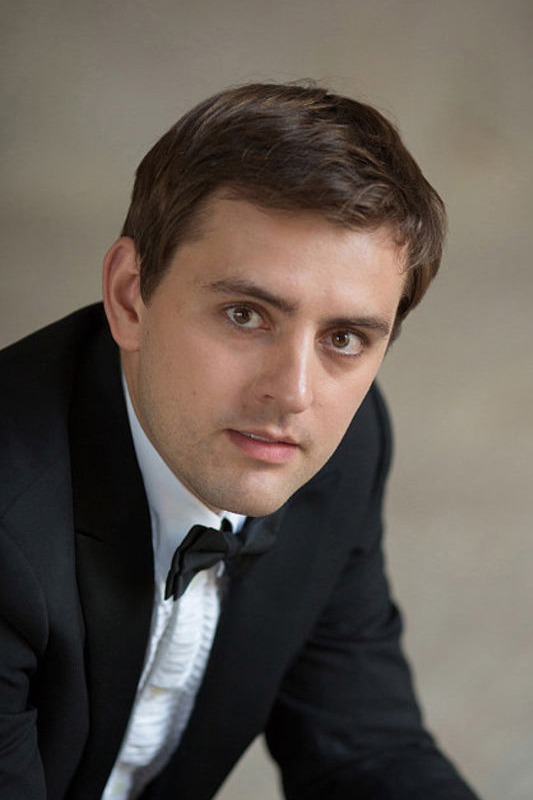 Young lyric tenor Alexey Neklyudov is one of the most promising singers of this repertory. His debut at Bregenz Festival 2019 as Lenski (Eugen Onegin) was a widely noted success after his very impressive debuts at Deutsche Oper am Rhein as Alfredo (La Traviata) and at Theater St. Gallen as Nemorino (Elisir d‘ amore). His engagements in the season 2019/20 will include further prestigious debuts: Ferrando (Cosi fan tutte) at Oper Zürich, Alfredo in a new production of La Traviata at Komische Oper Berlin and Lenski in concert performances of Eugen Onegin with Lorenzo Viotti conducting. He is also regular guest at the Bolshoi Moscow where Alexey Neklyudov will appear as Alfredo and Lenski this very season.

Already his debut in Western Europe in the role of Nemorino in Elisir d’amore at the Badische Staatstheater Karlsruhe was a huge success. He could underline this success with excellent interpretations of Tamino (Zauberflöte), Oronte (Alcina) and Percy (Anna Bolena) at the same house in the season 2017/18. In 2018 he gave his debut as Don Ottavio in concert performances of Don Giovanni together with the Moscow Chamber Orchestra under the baton of Stefano Montanari at the Tchaikovsky Concert Hall. The Bolshoi Moscow presented him as Belfiore in a new production of Il viaggio a Reims and in the role of Lenski. At Colmar Festival 2019 Mr Neklyudov was invited to sing Mozart’s Requiem and Rachmaninov’s The Bells.

Alexey Neklyudov began his musical career in Reutov near his hometown Moscow. His further studies took him to the Galina Vishnevskaya Opera Center and the Gnessin-Institute in Moscow, where he studied with Svetlana Nesterenko. While a student, he won several vocal competitions. In 2012 and 2013 he was awarded stipends form the Russian National Philharmonic and the Müslüm Magomayev Foundation, respectively, after which he participated in the academy of the Aix-en-Provence Festival in 2015.

In 2010 Alexey Neklyudov made his debut with Russian National Philharmonic under the director of Vladimir Spivakov, who subsequently invited him to the Colmar International Festival in 2013 and 2014. The tenor has worked with numerous other conductors such as Vladimir Jurowski, Vladimir Fedoseyev, Peter Neumann, Federico Maria Sardelli, Frieder Bernius, Benjamin Pionnier, Fabio Mastrangelo, Dimitri Jurowski and Ken-David Masur.

In 2015 Alexey Neklyudov performed the role of Likov in Rimsky-Korsakov’s The Tsar’s Bride in Tel Aviv. In 2014 he celebrated his debut at Moscow’s Bolshoi Theater under the baton of Stefano Montanari as Ferrando in a new production of Cosi fan tutte staged by Floris Visser. Before that in 2013 he became a member of the ensemble at the Novaya Opera Moscow, where he performed such roles as Lensky in Tchaikovsky’s Eugen Onegin, Tebaldo in Bellini’s I Capuleti e I Montecchi, Zar Berendey in Rimsky-Korsakov’s The Snow Maiden, Alfredo Germont in Verdi’s La traviata and Narraboth in Strauss’ Salome.