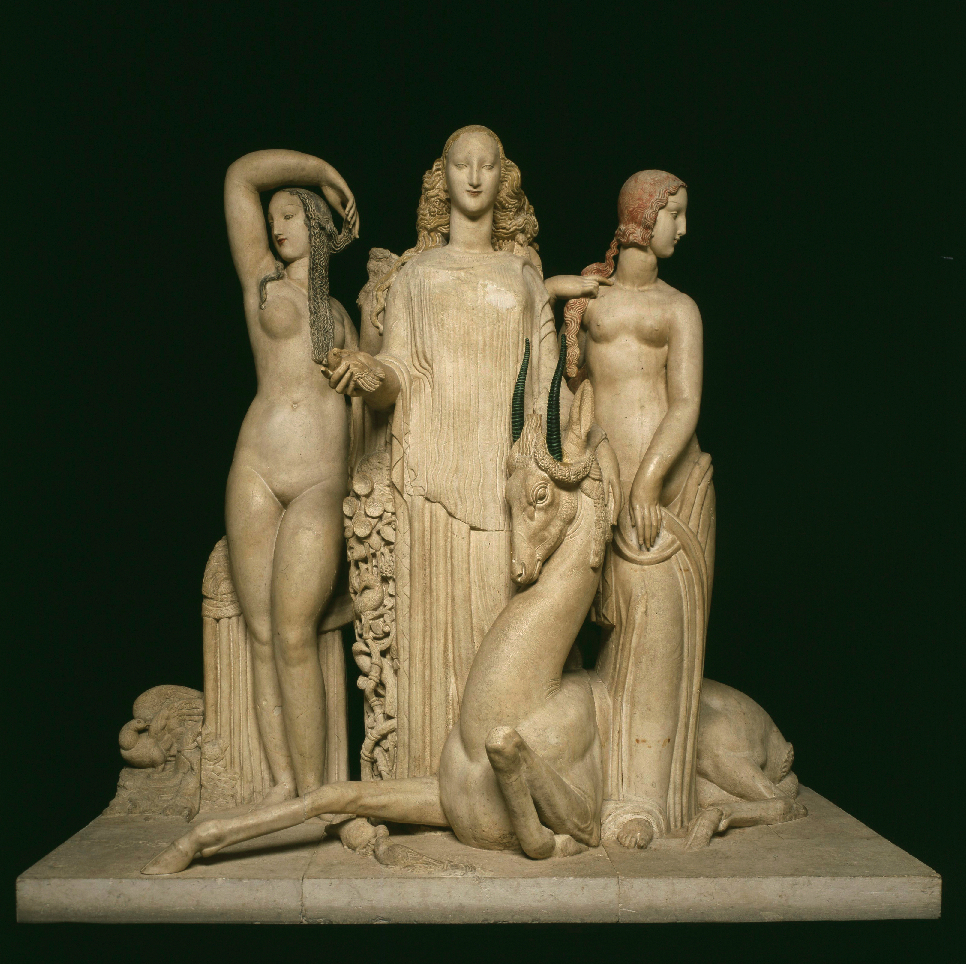 The original title of this monumental sculptural group by Janniot, which was executed by the sculptor in Rome during the last of the three years he spent training at the Académie de France, was A la gloire de Jean Goujon, or Hommage à Jean Goujon. The group, which immediately attracted attention, was to become famous at the International Exposition of Modern Decorative and Industrial Arts held in Paris in 1925, becoming the symbol of an era and an artistic movement: Art Deco. Jean Goujon, the great Renaissance sculptor, was evoked as the artist who most successfully managed to reconcile modernity and tradition in France. The group consists of three young women, Diana the hunter, two nymphs, a doe (a typical symbol of Art Deco), and various birds. Stylised flowers and fronds complete the composition. The decorative exuberance of the group is further accentuated by the introduction of colour to the faces and hair of the female figures.

Janniot took part in the international fair at Bourdelle’s invitation. However, his friendship with the designer Ruhlmann explains the presence of the group outside the “Hotel d’un Riche Collectionneur”, one of the exhibition’s most visited pavilions. Designed by the architect Pierre Patout, the pavilion also featured interior and exterior reliefs by Joseph Bernard. In 1939, Calouste Gulbenkian acquired the group at the Lola Voisin sale with the intention of incorporating it into the decorative scheme of the gardens of his Normandy property, Les Enclos. However, this idea did not meet with the approval of his landscape architect and the collector abandoned the project. Transported to Portugal, along with the rest of the collection, the group was incorporated into the recently opened Calouste Gulbenkian Museum in October 1969, where it became a kind of symbol marking the breadth of the collector’s interests.

Gabriel Voisin Collection, from 1925, and then inherited after his death by his widow, Lola Voisin. Acquired by Calouste Gulbenkian, through Marcel Jonas, at the Lola Voisin sale, held in Paris (Hôtel Drouot), 20 January 1939 (lot 49).