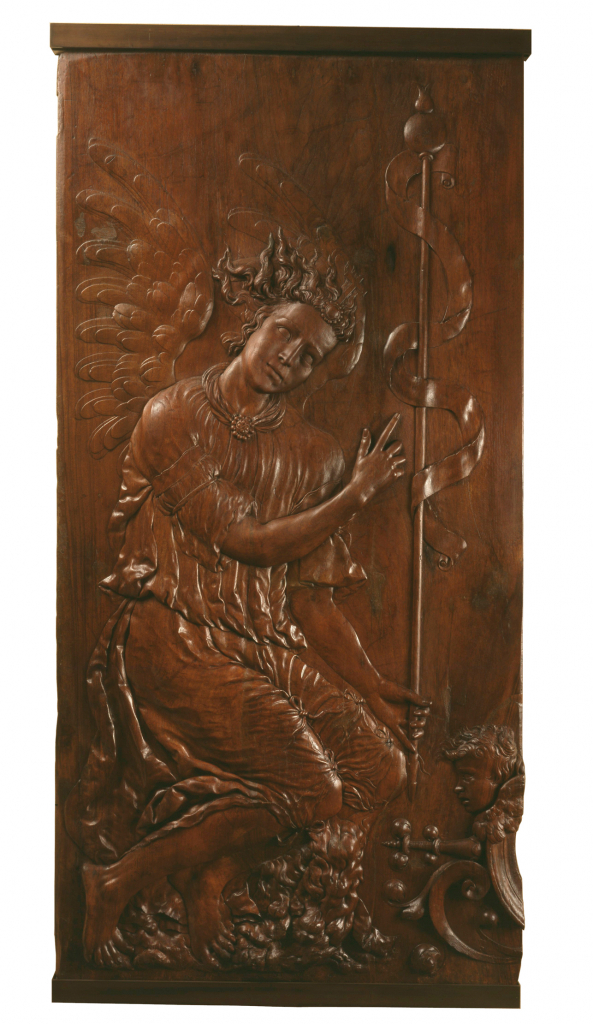 Saint Gabriel, The Angel of the Annunciation

A skilfully executed bas-relief of great aesthetic beauty, depicting the Angel of the Annunciation. Some Renaissance characteristics are still evident, but the Baroque influence is now marked. This bas-relief is just a fragment of the original work, which would undoubtedly have included the Virgin Mary. In the bottom right-hand corner, there appears to be part of a prie-dieu, finished off by an angel, a detail which had a dual function in separating the two areas of activity and playing a supporting role in the representation of the Virgin Mary.

The Archangel Gabriel is one of the four archangels mentioned in the Holy Scriptures. Warrior of Heaven and guardian of the celestial treasury, he is the principal messenger of the gods and the Angel of Redemption. In his left hand, as an attribute, he holds the messenger’s staff – the olive branch – around which a ribbon, which would have been inscribed with the angelic greeting Ave Maria, Gratia Plena, winds in a spiral. His right hand extends towards the Virgin, in an oratorical gesture, with his index finger raised to emphasise the words he will speak. Gabriel is shown barefoot, his wings still fluttering, preparing to kneel on a cloud. He wears a tunic fastened at the neck with a brooch. On his head there is a Latin cross, the symbol of the Christian religion and of redemption through Christianity.