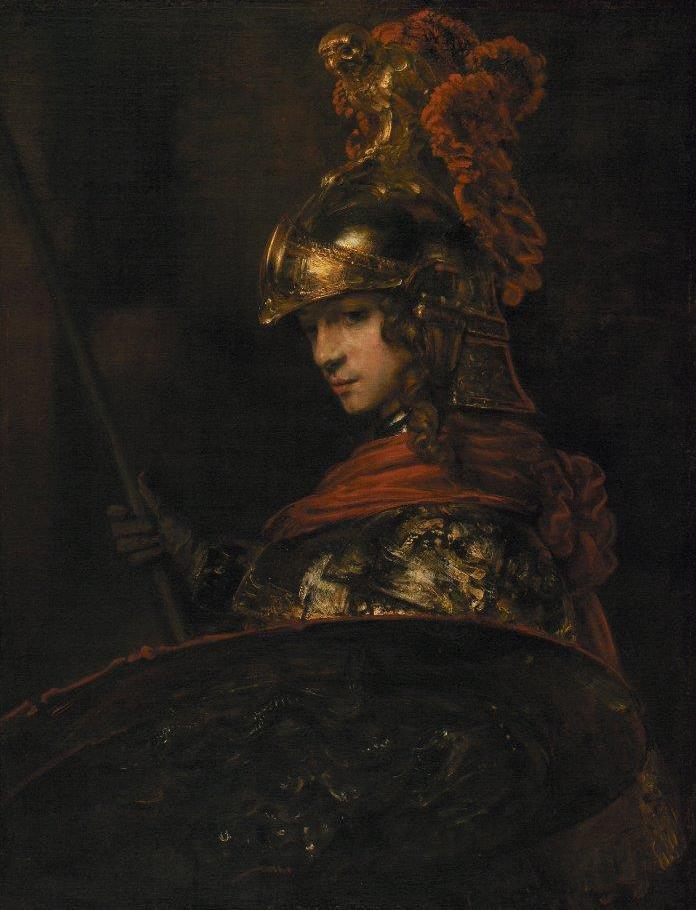 The theme of this work, like its date and origin, has been a subject of controversy for specialists. The painting’s authorship has also been disputed; today, however, it is believed that the painting was produced by Rembrandt and one of his pupils. This possibility is supported by scrutiny of the underlying drawing, in which one can see the expressive force of the master’s hand, which is less evident in some areas of the finished work. In the right hand of the androgynous figure there is a spear, while in the left hand there is a shield embellished with the head of the Medusa and her characteristic snakes. This element, and the owl that tops the helmet, are symbols of the goddess Athena. The canvas is cropped at the bottom and along the left side. The figure is reminiscent of other works depicting Titus (b. 1641), the painter’s son, who may have posed for this work.

Among other hypotheses, it has been suggested that the artist was invited to paint the goddess Minerva to celebrate Saint Luke’s day in Amsterdam in 1654. A more recent theory proposes that the painting may have been part of a classical trilogy consisting of Venus (Musée du Louvre, Paris), Juno (Armand Hammer Museum, Los Angeles) and this portrait of Pallas Athena. The group belonged to Herman Becker (c. 1617–1678), an art dealer who possibly commissioned them from Rembrandt. It is believed that the painter may have been inspired by a group of engravings produced in 1646 by Wenzel Hollar (1607–1677) after compositions by Adam Elsheimer (1578–1610), whose titles also included Greek and Roman names.