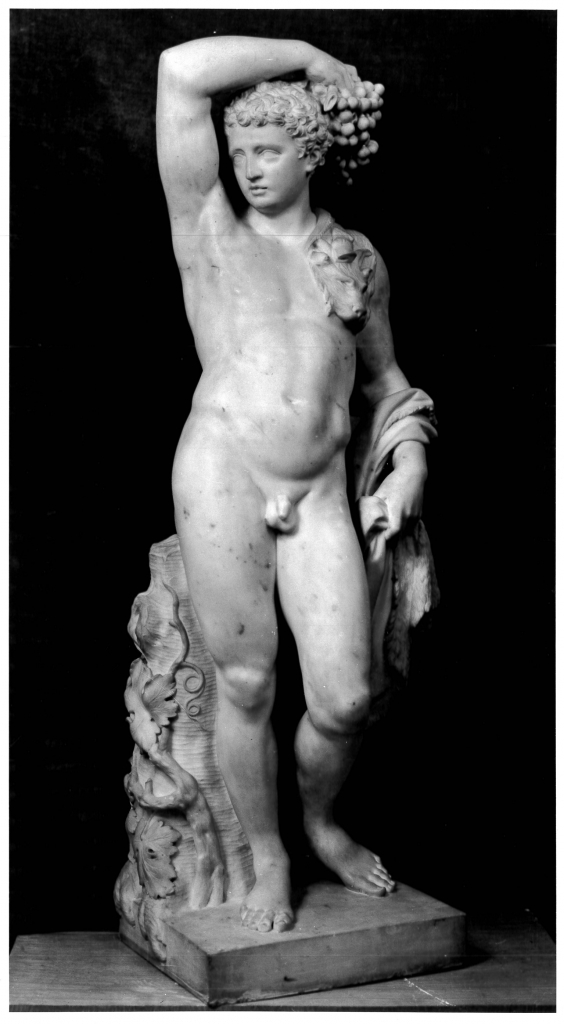 Bacchus is a sculpture of exceptional aesthetic quality which conveys a sense of expressive monumentality, despite being smaller than life-size.

Michael Rysbrack was extremely prolific throughout the nearly fifty years that he spent working in England for various patrons, notably the banker Henry Hoare II. Bacchus was one of the banker’s many commissions for his villa at Stourhead in Wiltshire, which was completed in 1722 and is now a National Trust property. The sculpture, which was produced for the dining room of the main house, featured a pendant (a very popular custom in the eighteenth century) in the form of a faun playing the flute, an Italian-made copy of an antique statuette.

Of Dutch origin, Michael Rysbrack, who moved to London from Antwerp in 1720, made an important contribution to the revival of English sculpture in the second half of the eighteenth century. Inspired by the sculpture of Classical Antiquity, Rysbrack was an exemplary classical sculptor, refining the late-Baroque style in which he had trained in the city of his birth.

1751 – Commissioned from Michael Rysbrack by Henry Hoare II (1705-85) for the dining room of his property at Stourhead.

1780 – All his children having died, Henry Hoare II bequeathed the property and its contents to his favourite grandson, Sir Richard Colt Hoare, 2nd Baronet (1758-1838), who moved to Stourhead in 1783.

1838 – Sir Richard, having no direct heir, left the property at Stourhead to his half-brother and donated Bacchus to Henry du Pré Lebouchere (1798-1869), Lord Taunton (1859), who then lived at Park House, close to Bridgwater. Lord Taunton, whose wife was a member of the Baring banking family, was a great art collector.

1869 – As Lord Taunton had no sons, on his death his estate passed into the possession of his daughter, Mary Dorothy, who in 1872 married Edward James Stanley, a descendant of the Earls of Derby.

1883 – Bacchus was sold at auction at Christie, Manson and Woods (1 and 2 June), as part of the Stourhead Heirlooms Sale, instigated by the then owner Sir Henry Ainslie Hoare, 5th Baronet (1824-94). Bacchus was considered to be the most important piece in the auction, taking pride of place on the catalogue cover. It was bought by C.R. Denison.

1920 – What remained of the property and contents of Quantock Lodge, owned by Edward Arthur Vesey Stanley, was sold at auction at Sotheby’s (16 July). At this auction, Calouste Gulbenkian bought four sculptures through Duveen. Rysbrack’s Bacchus was Lot 29.