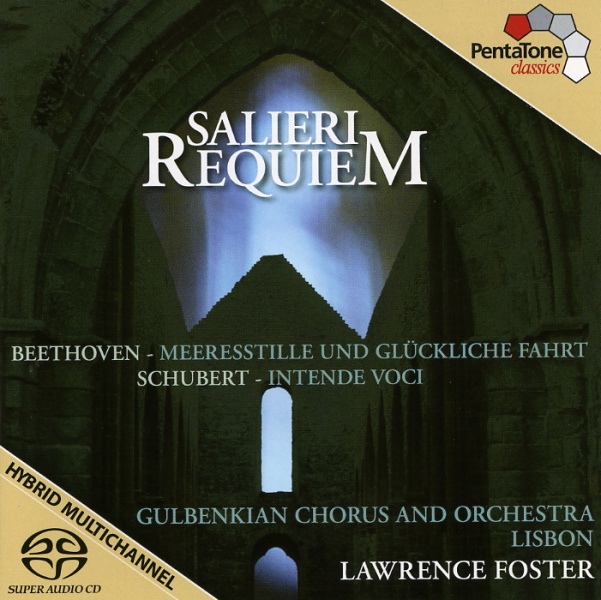 Thanks primarily to Peter Shaffer’s play Amadeus and Milos Forman’s subsequent cinematic adaptation of it, poor Antonio Salieri’s reputation has been at a low-ebb for more than a generation. Even before that, Rimski-Korsakov’s short opera Mozart and Salieri continued to perpetrate the totally unfounded legend that Salieri’s envy of the younger and more talented composer led to his attempt on Mozart’s life by the administration of poison to the mortally ill composer.

Throughout his life Salieri composed an enormous quantity of sacred works including five Masses, but completed only one Requiem. This was composed in 1804, some thirteen years after Mozart’s death, and it was played at the composer’s own funeral in 1825. This gripping live performance (recorded in November 2009) from Lawrence Foster and his Portuguese forces in excellent sound should do much to engender a more considered view of Salieri’s undoubted compositional talent, at least as far as this requiem is concerned.

The Requiem in C minor is written for four soloists, chorus, orchestra and organ, the latter’s pedal notes adding imposing weight in sections such as the Agnus Dei. The bulk of the Requiem is entrusted to the choir, the very impressive Coro Gulbenkian, while the soloists, who only sing as a group, are well matched if not notably vocally distinguished. The orchestral introduction of the Introitus with its plaintive cor anglais solo and long melodic Italianate lines sets the devotional mood of the piece, yet surprisingly the work emerges as one of the most cheerful requiems imaginable. The thundering timpani and brass fanfares of the Dies Irae is predictably quite striking, but so too is the resplendent and all-too-brief Sanctus. Lawrence Foster’s weighty yet very lively performance is all one could wish for, and the Orquestra Gulbenkian of which he is the Music Director, respond magnificently.

Less familiar works by two of Salieri’s pupils, Beethoven and Schubert make for an intriguing and apt solution to the problem of what is music is suitable to couple with this 39 minute Requiem.

Beethoven’s short cantata Meeresstille und Glückliche Fahrt Op. 112 (Calm Sea and Prosperous Voyage) is a setting of a pair of poems by Goethe and dedicated to him. The cantata dates from 1815 and beautifully evokes the imagery of the poems. The first section depicts a ship becalmed on a tranquil sea, while the second expresses the joy felt as the wind returns, the voyage continues and land is in sight. The cantata is mature Beethoven at his finest and Foster gives a masterly and spacious performance of this impressive piece. The chorus’s singing is breathtaking in the opening Sostenuto that depicts the stillness of the sea and the becalmed vessel and, as in the previous work, demonstrates their clear enunciation of the text.

Schubert composed the tenor aria with chorus Intende voci in 1828, the final year of his life. It was published in 1897 under the title Offertorium. The text of this sublime piece is taken from Psalm 5 (Hearken to the voice of my prayer, O my King and my God. For unto Thee will I pray, O Lord). It is a pity that the singing of the tenor soloist Marius Brenciu (a stylish Prunier in the MET’s recent production of Puccini’s La Rondine) sounds rather strained at first, and does not match the ethereal oboe playing of Pedro Ribeiro nor the contribution of the excellent chorus.

The Polyhymnia team have achieved a warm and well-balanced sound in the Grande Auditório of the Calouste Gulbenkian Foundation, Lisbon, capturing both the incisive brass and crisp timpani playing with much impact. The chorus sounds quite forward but is well balanced with the orchestra and as I have indicted, their diction is immaculate. There is no audience noise or applause. My only grumbles are that no texts have been provided for any of the works on the disc, perhaps not so important in the case of the Requiem, but essential for full appreciation of the Beethoven, and that the proofing of the booklet should have picked up that Salieri’s dates were not 1885-1935!

This is an enormously enjoyable recording of neglected works and is well worth investigating.