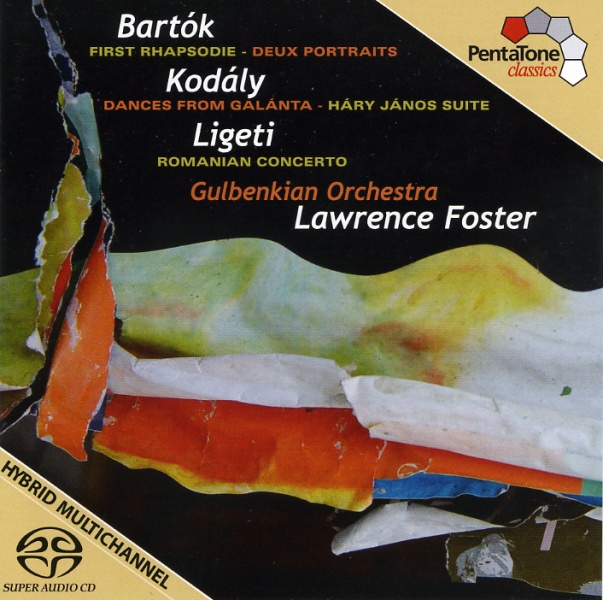 This generous programme of Hungarian orchestral works, principally by Kodály and Bartók, is particularly welcome for the inclusion of one rarity, the Concert Românesc (Romanian Concerto) by György Ligeti.

Those familiar with only the later compositions of this «enfant terrible» of Hungarian composers will be surprised by the melodiousness and instant accessibility of this early work (1951) in which the Ligeti uses authentic Romanian folk music in what is essentially a short four-movement suite.
The song-like «Andantino» with which the work opens leads to a vigorous and brilliantly scored «Allegro vivace».The slow movement features a pair of natural horns, used to suggest the sound of distant Alpine horns on mountain pastures, while the finale is a wild dance with scurrying strings and a prominent gypsy fiddler part. Its opening brings to mind the start of the finale of Bartók’s «Concerto for Orchestra» before it morphs into something akin to Enescus 1st Romanian Rhapsody. It is just the sort of colourful piece that one can imagine Leopold Stokowski would have revelled in had he known it. As is to be expected from a conductor who has given much of his musical life to the promotion of Enescu’s music, Lawrence Foster is also in his element here, and one would be hard pressed to find a more entertaining performance than this one.

Kodály is represented by two of his most popular works, the «Dances from Galánta»and «Háry János  Suite».

The five Galánta dances (each allotted a separate track on this disc) are given polished performances and no lack of stylish playing, particularly from the orchestra’s principal clarinet, Esther Georgie, who fully deserves her credit in the accompanying booklet. The colourful orchestration of Háry János makes it an ideal piece to demonstrate the realism of hi-rez sound in movements such as «Viennese Musical Clock» while the distinctive timbre of the cimbalon adds an authentic Hungarian touch to both ‘Song’ and the ‘Intermezzo’. It must be said, however, that the orchestra does not always sound entirely comfortable coping with Foster’s use of rubato, some of which sounds awkward rather than natural, and there are many more vivid and unbuttoned performances of these Kodály pieces available on CD. Native Hungarian conductors such as Szell, Dorati and Fischer bring an innate flare and passion to this music that Foster and the Gulbenkian Orchestra can’t quite match.

The cimbalom also makes a prominent appearance in Bartók’s «1st Rhapsody» or Violin and Orchestra. Surprisingly, this is the only work in which Bartók used that quintessentially Magyar instrument and, since the cimbalom part is often allotted to a piano, its presence in this performance adds a welcome idiomatic touch. The solo violin part is played here by the orchestra’s concertmaster, Mihaela Costea, who also is the soloist in the first of Bartók’s ‘Two Portraits for Orchestra’.

As I have indicated, Lawrence Foster conducts all the works on this disc with his usual professionalism and the fine Gulbenkian Orchestra respond to his unfussy direction with enthusiastic and refined playing. All that is lacking is that indefinable magic found elsewhere. The Polyhymnia team’s live recording (no trace of audience noise or applause) is well-balanced and truthful rather than overtly spectacular.

Reservations notwithstanding, this is a most enjoyable SA-CD.net.