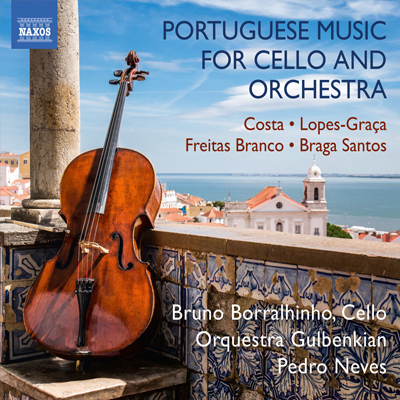 In Portuguese Music for Cello and Orchestra, the cellist Bruno Borralinho and the Gulbenkian Orchestra, conducted by Pedro Neves, interpret the Portuguese repertoire for cello and orchestra. With this unprecedented recording, NAXOS proposes a fascinating tour through the Portuguese music of the 20 th century. Not only does it include the most relevant works of the national repertoire for cello and orchestra – two of them in absolute debut –, but it also comprehends some of the most relevant Portuguese composers from the second half of the 20 th century – Luís de Freitas Branco, Luiz Costa, Joly Braga Santos and Fernando Lopes-Graça, allowing the fruition of the multiple tendencies that characterized the Portuguese music of this period.