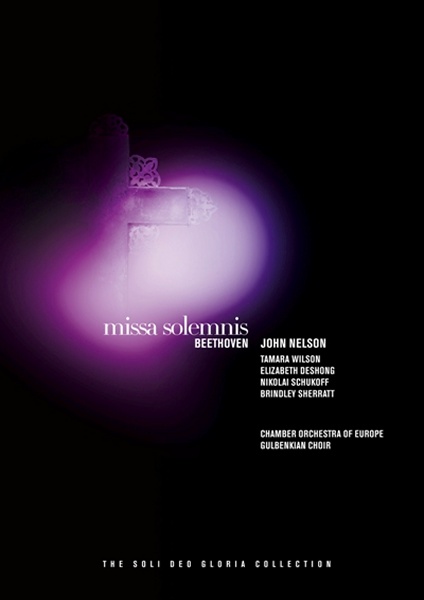 For me the Missa Solemnis is Beethoven’s most forbidding and difficult work, the one I am most conscious of not being able to rise to. I suspect that the performances and recordings I have most enjoyed have been slightly mellower than the composer intended. No one could say that of this recording, made in 2010, and I think the most impressive I have ever heard, though Colin Davis’s at the Proms last year was in this class. The Chamber Orchestra of Europe plays magnificently, never tiring. And the same goes for the chorus, a professional body, all of whose members have other jobs in the day, but meet each evening to sing.

They are fearless, as they need to be. They not only cope with Beethoven's often absurd demands, they seem to exult in them, though they don't forget to impart that sense of effortfulness which is so large an element in the score. The soloists are placed behind the orchestra, because as John Nelson explains in an exceptionally helpful interview in the extras, they are not in fact soloists but a quartet - though I must mention that the tenor, Nikolai Schukoff, is outstanding.

John Nelson, of whom we in the UK see and hear very little, clearly has the measure, as much as anyone, of this score, and succeeds in conveying the urgency of his view with gestures and expressions that are eloquent and undemonstrative. It seems unlikely that Beethoven's vision in this work will ever be more completely captured.

The Gulbenkian Choir is appropriately full-throated in the big moments... the quieter passages are diaphanous... the textures precisely sculpted, at all dynamic levels.

From the first chord of the Kyrie the attack easy yet precise, the sound full and organ like John Nelson leads a powerful performance of this daunting score. He's not afraid to move the music along: the Gloria starts with a nice headlong impulse, and the concluding fugues here and in the Credo are brisk and driving. Yet Nelson also responds to the music's variety, infusing the flowing cantabiles with a lovely buoyancy, playing the introspective passages with sustained concentration: the Sanctus unfolds patiently, with solemn mystery. He knows how to register changes of mood and color as at "Domine fili unigenite" in the Gloria without disrupting the established pulse, always an advantage in Beethoven.

Nelson's roots in the choral tradition show here in his attention to choral tone and expression. The Gulbenkian Choir is appropriately fullthroated in the big moments, conveying real joy in the rocket like lines at "Et ascendit" in the Credo. Yet the quieter passages are diaphanous, particularly when the parts are divided; the attacks are calm, the textures precisely sculpted, at all dynamic levels. (Perhaps I wouldn't swear that they quite manage every note in the Gloria's coda at Nelson's speed.) The Chamber Orchestra of Europe is similarly responsive, playing with suave, rich tone, digging in incisively as needed; leader Marieke Blankestijn plays the Benedictus solo vibrantly.

First-class soloists prove a major advantage. Soprano Tamara Wilson handles her high tessitura with a nice balance of ease and thrust. She has the power for "Dona nobis pacem," and she launches "Pleni sunt coeli" which Nelson assigns to the quartet, rather than the chorus with energetic brilliance. Nikolai Schukoff's ringing tenor moves a bit stiffly, and his accenting can be insistent, but his proclamatory tones are welcome at "Et homo factus est" in the Credo, and he scales down well for the ensembles. Brindley Sherratt fills out the bass lines with solid resonance and is only slightly taxed by the high bits of the Benedictus. Elizabeth DeShong brings real depth and firmness to the alto solo. The four together constitute an impeccably balanced, blended quartet with even DeShong's part strongly "present" in the ensembles and they're unfazed by Nelson's tempo in the In gloria Dei Patris stretto. A momentary, minor miscoordination in the Credo's "Amen," in this context, is startling.

The conservative video production manages an interesting variety of camera angles, but we're always looking at something appropriate, and the choice of shots unobtrusively draws attention to a clean attack here, a woodwind doubling there all nicely done. The sonics are beautiful, with a conspicuous overhang in general pauses and cutoffs. As extras, there are interviews with Nelson and with COE chairman Peter Readman.