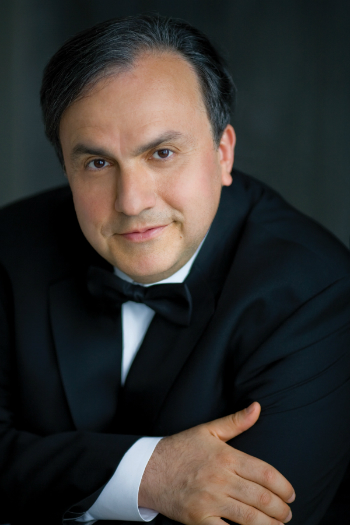 Internationally recognized as one of today’s most acclaimed and admired pianists, Yefim Bronfman stands among a handful of artists regularly sought by festivals, orchestras, conductors and recital series. His commanding technique, power and exceptional lyrical gifts are consistently acknowledged by the press and audiences alike.

In recognition of a relationship of more than 30 years, Mr. Bronfman will join the Israel Philharmonic conducted by Zubin Mehta for concerts during the orchestra’s US tour in the fall including Carnegie Hall, followed by concerts in Munich, London and Vienna with the Bayerischer Rundfunk Orchestra and Mariss Jansons, another frequent partnership and collaborator. In addition to returns to the orchestras of New York, Cleveland, Los Angeles, Philadelphia, Pittsburgh, Washington, Indianapolis and Toronto, he will tour with the Vienna Philharmonic and Andrés Orozco-Estrada in a special program celebrating his 60th birthday in the spring. In Europe he can also be heard in Berlin with the Philharmonic as well as in recital; Italy, France, Belgium, Germany and London also in recital; and on tour with the Leipzig Gewandhaus Orchestra conducted by Andris Nelsons. A tour in Asia with the London Symphony Orchestra and Gianandrea Noseda brings the season to a close in June.

He has also given numerous solo recitals in the leading halls of North America, Europe and the Far East, including acclaimed debuts at Carnegie Hall in 1989 and Avery Fisher Hall in 1993. In 1991 he gave a series of joint recitals with Isaac Stern in Russia, marking Mr. Bronfman’s first public performances there since his emigration to Israel at age 15. That same year he was awarded the prestigious Avery Fisher Prize, one of the highest honors given to American instrumentalists. In 2010 he was honored as the recipient of the Jean Gimbel Lane prize in piano performance from Northwestern University.

Widely praised for his solo, chamber and orchestral recordings, Mr. Bronfman has been nominated for 6 GRAMMY® Awards, winning in 1997 with Esa-Pekka Salonen and the Los Angeles Philharmonic for their recording of the three Bartok Piano Concerti. His prolific catalog of recordings includes works for two pianos by Rachmaninoff and Brahms with Emanuel Ax, the complete Prokofiev concerti with the Israel Philharmonic and Zubin Mehta, a Schubert/Mozart disc with the Zukerman Chamber Players and the soundtrack to Disney’s Fantasia 2000. His most recent CD releases are the 2014 GRAMMY® nominated Magnus Lindberg’s Piano Concerto No. 2 commissioned for him and performed by the New York Philharmonic conducted by Alan Gilbert on the Da Capo label; Tchaikovsky’s Piano Concerto No.1 with Mariss Jansons and the Bayerischer Rundfunk; a recital disc, Perspectives, complementing Mr. Bronfman’s designation as a Carnegie Hall ‘Perspectives’ artist for the 2007-08 season; and recordings of all the Beethoven piano concerti as well as the Triple Concerto together with violinist Gil Shaham, cellist Truls Mørk, and the Tönhalle Orchestra Zürich under David Zinman for the Arte Nova/BMG label.

Now available on DVD are his performances of Liszt’s second piano concerto with Franz Welser-Möst and the Vienna Philharmonic from Schoenbrunn, 2010 on Deutsche Grammophon; Beethoven’s fifth piano concerto with Andris Nelsons and the Royal Concertgebouw Orchestra from the 2011 Lucerne Festival; Rachmaninoff’s third concerto with the Berlin Philharmonic and Sir Simon Rattle on the EuroArts label and both Brahms Concerti with Franz Welser-Möst and The Cleveland Orchestra (2015).

Born in Tashkent in the Soviet Union, Yefim Bronfman immigrated to Israel with his family in 1973, where he studied with pianist Arie Vardi, head of the Rubin Academy of Music at Tel Aviv University. In the United States, he studied at The Juilliard School, Marlboro School of Music, and the Curtis Institute of Music, under Rudolf Firkusny, Leon Fleisher, and Rudolf Serkin. He is a 2015 recipient of an honorary doctorate from the Manhattan School of Music.