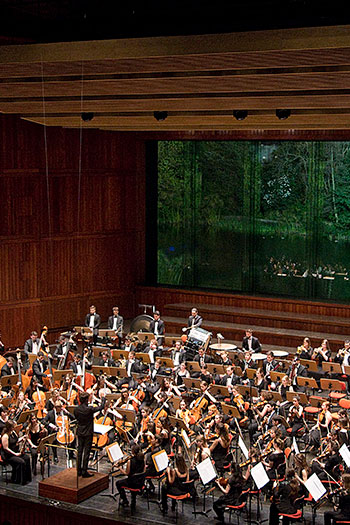 The GUSTAV MAHLER JUGENDORCHESTER (GMJO) was founded in Vienna in 1986/87 on the initiative of Claudio Abbado. Today it is regarded as the world’s leading youth orchestra and was awarded by the European Cultural Foundation in 2007.

As well as supporting young musicians and their work, Abbado was keen to encourage the music making of young Austrian musicians together with colleagues from the then socialist republics of Czechoslovakia and Hungary. As a consequence, the GMJO became the first international youth orchestra to hold open auditions in the countries of the former Eastern Bloc. In 1992, the GMJO opened up to musicians aged up to 26 from all over Europe. As the youth orchestra for the whole of Europe, it is under the patronage of the Council of Europe.

At the auditions that take place every year in over twenty-five European cities, an international jury selects candidates from an average of 2000 applicants. Prominent orchestra musicians are members of this jury and also responsible for the preparation of the repertoire in the individual sections during the rehearsal periods of the orchestra.

Before the tours, the orchestra rehearses the concert programmes in one of its residence cities: Vienna, Bozen/Bolzano, Pordenone or Lisbon. Prominent musicians from first-class orchestras, such as the Vienna and Berlin Philharmonic Orchestras, supervise the rehearsals in individual sections, while the assistant conductor prepares the orchestra to the point where the tour’s guest conductor can work on the final musical details.

During these rehearsal periods, the young musicians gain valuable orchestras experience and receive important inspiration for their future careers. They do not receive a fee for participating in the projects of the GMJO, but, with support from its residence cities and its partners, the GMJO covers all costs that arise in conjunction with the rehearsal periods and the tours.

The GMJO has been a regular guest at the most prestigious concert halls and festivals for many years, such as the Gesellschaft der Musikfreunde in Vienna, the Concertgebouw Amsterdam, the Suntory Hall in Tokyo, the Mozarteum Argentino in Buenos Aires, the Salzburg Festival and the Salzburg Easter Festival, the Edinburgh International Festival, the BBC Proms, the Semperoper Dresden, and the Lucerne Festival.

Many former members of the GMJO are now members of leading European orchestras, some of them in principal positions. In 2012, an intensive partnership with the renowned Sächsische Staatskapelle Dresden was announced which includes concerts and projects involving members of both orchestras.

The GUSTAV MAHLER JUGENDORCHESTER was appointed “Ambassador UNICEF Austria” on the occasion of its 25th anniversary.