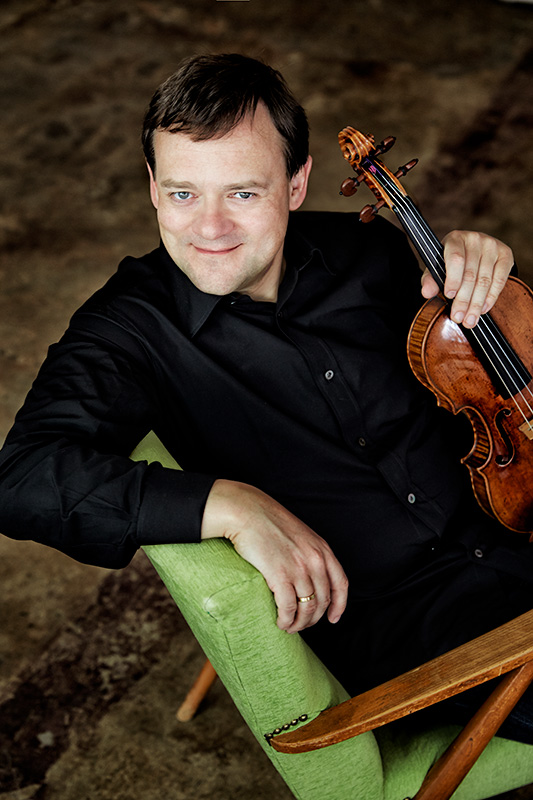 Frank Peter Zimmermann is widely regarded as one of the foremost violinists of his generation. Praised for his selfless musicality, his brilliance and keen intelligence he has been performing with all major orchestras in the world for well over three decades, collaborating on these occasions with the world’s most renowned conductors. His many concert engagements take him to all important concert venues and international music festivals in Europe, the United States, Japan, South America and Australia.

Highlights during the 2018/19 season include engagements with the Berliner Philharmoniker, Bamberger Symphoniker and Czech Philharmonic Orchestra, all conducted by Jakub Hrůša; the New York Philharmonic and Manfred Honeck; the Royal Stockholm Philharmonic and Sakari Oramo; the Bayerisches Staatsorchester and Dima Slobodeniouk; as well as a residency with the Staatskapelle Dresden and Christian Thielemann with concerts in Dresden, Vienna, Baden-Baden, Frankfurt, Hamburg and the Salzburger Osterfestspiele. Mr. Zimmermann will be giving concerts throughout Europe with his string trio, the Trio Zimmermann, as well as making a start with the Beethoven sonata cycle with pianist Martin Helmchen.

He received a number of special prizes and honours, among which the “Premio del Accademia Musicale Chigiana, Siena” (1990), the “Rheinischer Kulturpreis” (1994), the “Musikpreis” of the city of Duisburg (2002), the “Bundesverdienstkreuz 1. Klasse der Bundesrepublik Deutschland” (2008) and the “Paul-Hindemith-Preis der Stadt Hanau” (2010).

Over the years Frank Peter Zimmermann has built up an impressive discography for EMI Classics, Sony Classical, BIS Records, hänssler CLASSIC, Ondine, Decca, Teldec Classics and ECM Records. He has recorded virtually all major concerto repertoire, ranging from Bach to Ligeti, as well as recital repertoire. Many of these recordings have received prestigious awards and prizes worldwide. Most recent releases include violin concertos of J.S. Bach with the Berliner Barock Solisten (hänssler CLASSIC); the two violin concertos of Shostakovich with the NDR Elbphilharmonie Orchester and Alan Gilbert (BIS Records) – this recording was nominated for a Grammy 2018 -; and the 5 violin concertos and Sinfonia Concertante of Mozart with the Kammerorchester des Symphonieorchesters des Bayerischen Rundfunks and Antoine Tamestit (hänssler CLASSIC).

Born in 1965 in Duisburg, Germany, Mr. Zimmermann started playing the violin when he was 5 years old, giving his first concert with orchestra at the age of 10. He studied with Valery Gradov, Saschko Gawriloff and Herman Krebbers.