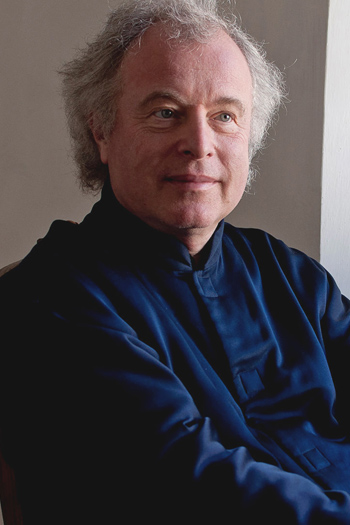 András Schiff was born in Budapest, Hungary, in 1953 and started piano lessons at the age of five with Elisabeth Vadász. Subsequently he continued his musical studies at the Ferenc Liszt Academy with Professor Pál Kadosa, György Kurtág and Ferenc Rados, and in London with George Malcolm.

Recitals and special cycles, including the major keyboard works of J.S. Bach, Haydn, Mozart, Beethoven, Schubert, Chopin, Schumann and Bartók form an important part of his activities. Since 2004 he has performed complete cycles of the 32 Beethoven Piano Sonatas in 20 cities, and the cycle in the Zurich Tonhalle was recorded live.

His latest disc with ECM Records released in April 2015 features the late piano works of Franz Schubert recorded on a 1820 Viennese fortepiano made by Franz Brodmann and was recently awarded  the  International  Classical  Music  Award  for best “Solo Instrumental Recording of the Year”. This is the second time András Schiff has received this award. The first was in 2012 for his recording “Geistervariationen” with works by Robert Schumann (ECM).

András Schiff has worked with most of the major international orchestras and conductors, but nowadays he performs mainly as a conductor and soloist. In 1999 he created his own chamber orchestra, the Cappella Andrea Barca, which consists of international soloists, chamber musicians and friends. In addition to working annually with this Orchestra, he also works with the Chamber Orchestra of Europe.

Since childhood he has enjoyed playing chamber music and from 1989 until 1998 was Artistic Director of the internationally highly praised “Musiktage Mondsee” chamber music festival near Salzburg. In 1995, together with Heinz Holliger,  he founded the “Ittinger Pfingstkonzerte” in Kartause Ittingen, Switzerland. In 1998 Mr Schiff started a similar series, entitled “Hommage to Palladio” at the Teatro Olimpico in Vicenza.

András Schiff has been awarded numerous international prizes. In 2006 he became an Honorary Member of the Beethoven House in Bonn in recognition of his interpretations of Beethoven’s works; in 2008 he was  awarded  the  Wigmore  Hall Medal in appreciation of 30 years of music-making at Wigmore Hall; in 2009 he was made a Special Supernumerary Fellow of Balliol College (Oxford, UK); in 2011 he received the Schumann Prize awarded by the city of Zwickau; in 2012 he received the Golden Mozart-Medaille by the International Stiftung Mozarteum, the Order pour le mérite for Sciences and Arts, the Grosse Verdienstkreuz mit Stern der Bundesrepublik Deutschland, and was made a Member of Honour of Vienna Konzerthaus; in December 2013 he was  given  The  Royal  Philharmonic  Society’s Gold Medal; in July 2014 he was awarded an Honorary Degree of Doctor of Music honoris causa by the University of Leeds.

In the spring of 2011 Mr Schiff attracted attention because of his opposition to the alarming political development in Hungary and in view of the ensuing attacks on him from some Hungarian Nationalists, decided not to perform again in his home country.

In June 2014 he was bestowed a Knighthood for services to Music in the Queen’s Birthday Honours List.