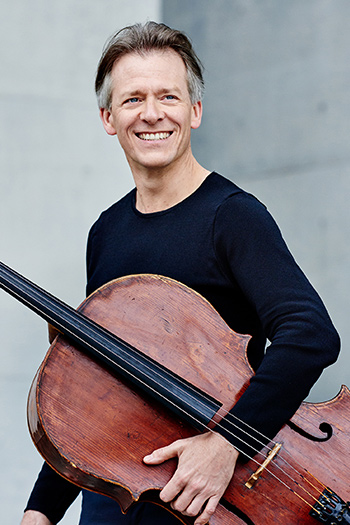 Alban Gerhardt (born 1969 in Berlin) is establishing himself as one of the great cellists of our time. His sound is unmistakable and his interpretations of the repertoire are distinguished in their originality. The cello starts to sing under his hands; standard works are newly discovered and unknown pieces are brought to life again. Gerhardt fascinates his growing audiences with the combination of an unerring musical instinct, intense emotionality and a very natural, arresting stage presence. After the loss of his Guadagnini cello Gerhardt now plays a unique instrument from the renowned maker Matteo Gofriller. Of particular concern for him is his desire to help audiences break with old listening and concert habits and to open classical music to a younger audience.

Highlights of Gerhardt´s last two seasons included performances with the Berlin Philharmonic under Christian Thielemann, the radio orchestras of Frankfurt (E.Inbal), Munich (H.Graf), Hamburg (C.v.Dohnanyi), Berlin (M.Janowski), the Gewandhaus Leipzig (D.Kitaenko), London’s Barbican with the BBC Symphony (John Adams) and his Carnegie Hall debut with the Fort Worth Symphony (M.Harth-Bedoya). He made his debuts with the Symphony Orchestras of Toronto (P.Oundijan) National Symphony Orchestra of Washington (H. Graf), San Francisco Symphony (M.Tilson Thomas), Chicago Symphony and Philhadelphia Orchestras (J. Conlon), the Philharmonic Orchestras of Bergen (A.Buribayev), New Japan and Malaysia and the KBS Seoul (C.P.Flor) as well as with the Chamber Orchestra of Europe under Frans Brüggen for the opening of the Schumann Festspiele in Düsseldorf.

During the 08/09 season, concerts include reinvitations to the City of Birmingham Symphony Orchestra under Andris Nelsons and the Boston Symphony, debuts with the Oslo Philharmonic (Mikko Franck), Finnish Radio Symphony (Hannu Lintu), Sydney and Melbourne Symphonies, the radio orchestras of Saarbrücken (C.Meister) and Helsinki (H.Lintu) and the China Philharmonic and Guangzhou Symphony Orchestras.

His collaborations with composers such as Peteris Vasks, Brett Dean, Jörg Widmann, Osvaldo Golijov, Mathias Hinke and Matthias Pintscher demonstrate his strong interest in enlarging the cello repertoire. As well as his intensive solo career, chamber music plays an important role in Gerhardts life. He is a frequent performer at international festivals like the BBC Proms in London and the Edinburgh Festival, and in prestigious halls such as the Wigmore Hall, Berlin Philharmonie, Suntory Hall Tokyo and the Chatelet Paris. Gerhardts regular chamber partners include Steven Osborne, Cecile Licad, Lars Vogt, Christian Tetzlaff, Lisa Batiashvili, Arabella Steinbacher, Tabea Zimmermann and Emmanuel Pahud.

Gerhardt is also a highly acclaimed recording artist, and has won two ECHO Classic Awards. For the past 3 years he has recorded exclusively with the distinguished British label Hyperion, spearheading their «Romantic Cello Concertos» series with two volumes of concertos by Schumann, Gernsheim, Dietrich and Volkmann (with the RSB Berlin under H.Lintu) as well as by Enescu, d’Albert and Dohnanyi (with the Scottish BBC under C.Kalmar). Soon to be released at the end of 2008 is his third recital cd with Hyperion featuring Sonatas by Chopin and Alkan with Steven Osborne, after an all-Reger double cd with Markus Becker.