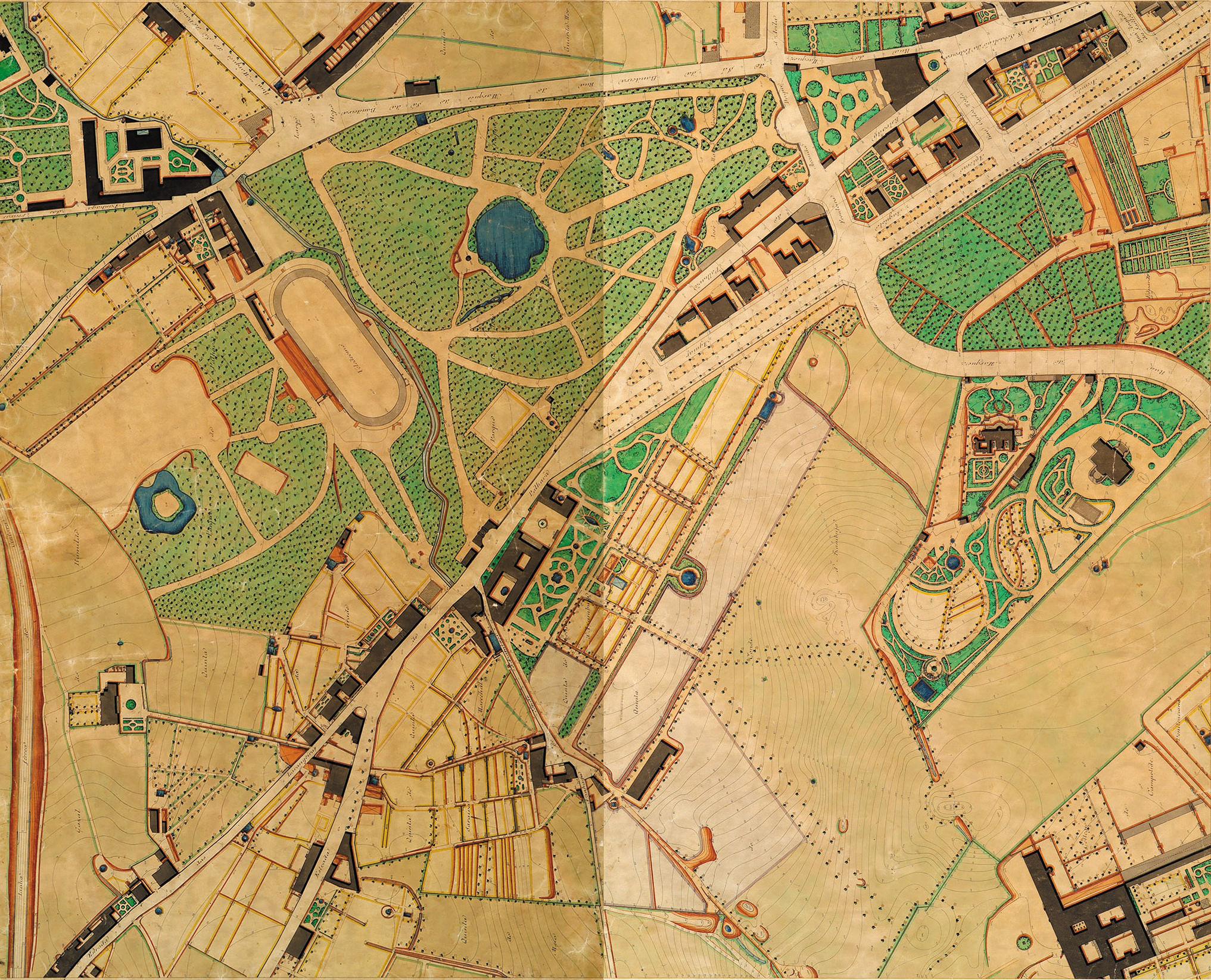 History of the Garden

Built in the sixties, a project by landscape architects António Viana Barreto and Gonçalo Ribeiro Telles, the Calouste Gulbenkian Foundation’s garden is one of the most iconic modern gardens in Portugal and a prime example of Portuguese landscape architecture.

Its design, based on subtle geometry, gives us a sense of peace and space instead of a rigid structure of paths and flower beds; along with the use of vegetation, it breaks free from global trends of that era.  Instead it celebrates the Portuguese landscape and the true Portuguese garden. The reproduction of Portuguese landscape ecological codes, the mixture and location of the plant species, the dialogue between the edges and glades, the construction of the space with the Mediterranean light and  trees canopy create “micro-landscapes” that are familiar, not only to us, humans, but to the all wildlife that the garden attracts.

This way of working the place, ruled by the landscape codes, is a strong characteristic of the school of Portuguese landscaping, itself influenced by the Germanic style.  This garden is the perfect epitome of this  school.

The farming property in the 18th and 19th centuries.

The place where the Calouste Gulbenkian Foundation stands today, in the centre of Lisbon, was one of the entrances to the city in the 18th century.

The Quinta do Provedor dos Armazéns, as it was known, belonging to Fernando Larre, was a recreational farm similar to many others found on the outskirts of the main Portuguese cities, consisting of a building, garden, orchard, vegetable garden, vineyard and cereal fields.

The trapezoidal structure that today we identify as being the Foundation’s garden, was already visible on 19th century maps. Defined by the Palhavã and Rego roads, it was located at the far end of the Estrada de S. Sebastião. This was the limit of Lisbon’s administrative area, made up of a ring of recreational farms that marked the transition between the urban area and a landscape of vegetable gardens, orchards, olive groves, cereal fields and oak forests.

The garden’s design is unique in the context of modern garden design due to the cultural narratives that the vegetation represents. It is based on the Portuguese vernacular landscape from an ecological and cultural perspective, which creates “micro-landscapes” that are familiar not just to humans but to the wildlife that populates it.

In 1861, the palace and farm were acquired by Maria Eugénio de Almeida, Peer of the Realm and State Advisor, a purchase which would result in a huge transformation of the space. The recreational farm, with its 18th century Palace, would give way to an enormous landscaped garden where a new, neoclassical palace was built. The owner’s choices reflect the profound changes that were underway in Portugal at the time, with the advent of a liberal monarchy  that viewed Europe as a symbol of progress and civilisation.

José Maria Eugénio invited Cinatti, an architect and set designer, to build his palace’s stables. The Parque de Santa Gertrudes (Saint Gertrude Park), baptised with this name in homage to his mother, was constructed by Jacob Weiss, a Swiss gardener trained in the French school of garden design.

The works began in 1866 and were completed in 1870. A lake was built in the middle of the park, becoming a central point from where a walkway led to the Palace’s entrance. The whole area was densely covered by native and exotic vegetation. According to original prints and stories of that time, small boats, aquatic birds and a small rocky island were to be found on the lake. Next to it was a bandstand where concerts took place every week. The exuberant vegetation clearly underlining the noble relationship between the lake and palace.

In 1883, Eugénio de Almeida’s widow, D. Maria das Dores Pinto, ceded the Parque de Santa Gertrudes to the Jardim Zoológico e de Aclimatação de Lisboa (the Lisbon Zoo and Acclimatization Garden) which remained installed here for 10 years. This was a new phase in its history: the park firmly established itself as the social hub of daily life in Lisbon and Portugal, a fact that remains true today.

The Park in the 20th century

Whilst all these changes took place, the Lisbon Improvement and Urbanization Plan was underway. During the process of land exchanges with the Lisbon City Hall, to accommodate the new design of the Berna and António Augusto de Aguiar Avenues, a 1917 document reveals that the owner, Carlos Maria Eugénio de Almeida, planned to transform the park into a private condominium, probably Portugal’s first. However, this proposal which was approved by the City Hall, never materialized.

In1943, the Feira Popular de Lisboa (Lisbon Fairground) was installed in the Parque de Santa Gertrudes, similar to many other fairgrounds that were built across Europe in the 19th century. For 14 years this was the venue for the liveliest summer nights, never to be forgotten by the people of Lisbon. Entertainment, gastronomy, arts and crafts, political life, theatre, music, dance, shops and industry all came together here.

Despite this intense journey through the various facets of Lisbon social life, “the the landscaped park designed by Jacob Weiss – the Swiss gardener hired by Eugénio de Almeida in 1866 – remained when the board of directors of the Calouste Gulbenkian Foundation decided to acquire part of it to fulfil the wish of its founder”. (Carapinha, A.2006)

The Calouste Gulbenkian Park (the sixties)

In 1957, the Parque de Santa Gertrudes was acquired by the Calouste Gulbenkian Foundation and the following year the Management, Projects and Works and Fine Arts services as well as the Foundation’s Museum, made it their home.

Between January 1958 and the inauguration of the Foundation’s headquarters and museum in 1969, these services were carried out in provisional premises near the Avenida de Berna.

Also in 1958, landscape architects Gonçalo Ribeiro Telles and Manuel de Azevedo Coutinho were contacted to develop, respectively, the Provisional Premises’ Garden Project, and a study on the maintenance and conservation of Palhavã Park, which had been badly damaged by intensive use in previous years. This study gave rise to a report in which an initial evaluation of the tree crown cover was carried out which proposed conservation and regeneration measure for all of the Park’s plant cover.

This was followed by the creation of a team of gardeners and infrastructures for the removal of debris, improvement of soil conditions, clearing and maintenance of the vegetation, successive planting of grass, shrubs and trees for the reshaping of the vegetation’s matrix structure, all of this whilst the landscape architectural project was being elaborated.

The character of this park was of major importance in the design of the Foundation’s Headquarters and Museum. In this regard, the Programme for the Headquarters and Museum Facilities states that: “The Parque de Santa Gertrudes, duly restored to its original, lush prime, will be one of the public spaces of greatest interest in Lisbon; a privileged place that will certainly attract the population and will provide the Foundation with opportunities for greater dissemination of its cultural activities. (…) the size of the Park, as well as the crucial urban role that it has played as one of the lungs of the city of Lisbon, conditions the use of the land, in order to obtain the maximum possible release.

The works that began in 1963 were completed in 1969. During these years, the Projects and Works Services, managed by a large team of engineers, designers and architects of the garden and buildings, developed interdisciplinary project solutions that responded to the countless issues that naturally arose in a project on such a scale.

It is important to note the construction techniques used for the building and garden which were very much ahead of the times and a result of this interaction, such as the drainage and water-capture solutions; the lake’s construction system, crossed underground by the building, the creation of an artificial humid ecosystem on its margins, the planting techniques and the protection of the trees, among olthers.

Photographs dating back to the sixties show a very different garden to what it is today – large grassy clearings together with young vegetation and some trees that were inherited from the 19th century park. We can also recognise the impressive eucalyptus trees that somehow defined the original plan of the building, the peppercorn trees on the lakeside, the design of the lake and its margins as well as the polygonal amphitheatre. Everything else has changed in the past 50 years, changing in terms of physiognomy but not character. In 1975 the Garden had suffered severe degradation and was recovered by landscape architect António Viana Barreto, resisting the death of the Elm forest (by Dutch elm disease) and the destruction of its most beautiful views by the construction of the CAM (Modern Art Center) building.

The Garden was definitively transformed and the vegetation evolved into a dense and heterogeneous forest, interrupted by small clearings and enclosing the lake within its interior, evoking a paradise archetype. The maturing of the garden was also a principal aim behind the project’s design and the revelation of the “privileged place” in Lisbon, predicted by the Projects and Works Services in 1958.

The Garden we find today, leafy, enveloping and full of surprising nooks, is the result of a very strong connection between Man and Nature. In this case, it is a unique situation, whereby the authors of the original project will continue to intervene, over time, taking advantage of the growth of vegetation and adapting the garden to fit within our modern times.

In 2000, Gonçalo Ribeiro Telles was invited to carry out a new garden rehabilitation project which began in 2002, ending ten years later. The proposal by landscape architect Ribeiro Telles was based on the strong interaction with the garden’s maturation process, by controlling the negative aspects of aging on the one hand and, on the other hand, integrating the most interesting aspects and places that the natural growth of the vegetation had created.

“Maintaining the structure, conceptual framework and genetic spatiality, Gonçalo Ribeiro Telles proposes a set of interventions of an aesthetic and ecological order that also seek to nullify some entropy outside the life of the Garden and that, in a way, have distorted the original concept . (…) the protective border is consolidated, views are reinforced, areas of meadow and lawn are redefined, the pathway system is enlarged, aiming to reveal the untapped spaces that nature had designed. Sometimes they emerge according to the perfect atmosphere, at other times they exhibit unexpected gems that offer themselves as new gardens that erupt in the garden. “(Carapinha, A. 2006)

A major cleaning and thinning operation, of the vegetation, was carried out, opening new paths and areas of enjoyment in previously inaccessible areas.
The closing and shaping of borders were carried out using shrub species such as Murta, Folhado, Buxo and other species of Portuguese flora that have been in this garden since its initial conception, many of which have been reproduced in the Foundation’s nurseries, safeguarding their genetic heritage.

The last phase to be completed was phase 4, with the paving of trails and construction of a small area for relaxing on the lake’s south bank. It is an area right by the water mirror, where an exception was made to the two different types of margins existing on the lake. The long bench represents the supporting wall that previously defined its margins, and the pebble surface, which establishes the altitude from the lakebed, replaces the vegetation previously surrounding the lake.

After all this work  “on the lushness of its vegetation”, which is surprising and very relaxing, the garden is populated in all its corners, full of planned and spontaneous events, a place to take a break where we can all feel “at home”.