Why does the green frog croak?

The Iberian green frog (Rana perezi) is the most common amphibian in Portugal. One of the places where it lives is in the Gulbenkian Garden, in Lisbon. It can be heard night and day, especially between May and July, the period when it is most active.

The only singers of this species are the males. “In females, these amphibians’ vocal sacs, found in the corners of the mouth, are rudimentary, they are undeveloped,” explains Rui Rebelo, an amphibian specialist and researcher at the Faculty of Science at the University of Lisbon. Nevertheless, they do emit some sounds of alarm when confronted with a dangerous situation.

The males, on the other hand, sing to attract the females, letting them know that they are ready to mate.

Reproduction occurs from mid-spring to late summer. Females lay their eggs in the water, usually attached to aquatic vegetation. The males then shed their sperm on the eggs, fertilizing them on the spot.

However,  the same female may lay  more eggs later, as long as the temperature of the water does not drop too much: “Since the eggs are immersed in water, if it is too cold the eggs take longer to develop, being at greater risk of being predated“ adds Rui Rebelo. 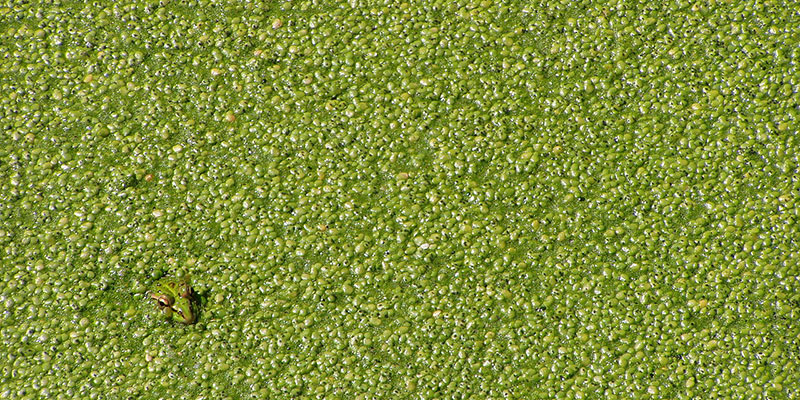 Normally, the males sing in chorus, competing against one another for the females. “When a male starts singing, others do too. It’s a competition, where males make themselves known to females, together. “

As for the females, all they need do is choose. The criterion is to select the male that has the deepest and most intense song.

This is because the male’s song is indicative of its genetic quality. If it has a deeper more intense song, it does not mean that it is more mature but rather that “it had a very good juvenile stage, during which it grew considerably“, adds the expert. “The bigger the animal, the deeper and more intense the sound.”

In fact, another function of the green frog’s singing is to repel other males. “In a chorus, the male with the weakest voice should not even bother trying to attract a female; he’s better off getting out of there.”

Sometimes, for those who have more experience, it is possible to distinguish the calls of the younger and older males. “Frogs start singing when they reach reproductive age, about the age of two. The first songs are weak and with a higher pitch. Later they become very similar and, in general, deeper. “

According to Rui Rebelo, there are species of Southeast Asian frogs that practice their songs, preparing for their big moment. “It has been proven that in some species, males look for cavities in trees to sing in, maximizing the sound they make. When they do this there are no females present.“

Let it be known that the green frog is more spontaneous, preferring to learn from experience.

Every month, throughout the year, Wilder magazine unveils some of the phenomena that are taking place in the Gulbenkian Garden and the natural world.