How do mushrooms reproduce?

Rui Simão, from the Ecofungos – Mycological Association, helps us unravel some of the mysteries of these curious beings from the natural world.

Mushrooms are neither animals nor plants, they belong to the fungi kingdom. They are “the visible fruiting of the mycelium”, the filamentous structure of fungi, which is usually underground. This structure can be found  “on the ground under foliage, inside old trees or in fallen logs”, describes Rui Simão.

In fact, “we could say that mushrooms are like apples attached to a huge apple tree, which in this case would be the mycelium,” notes this expert.

Just as apples produce seeds, mushrooms produce spores. “In most of the known mushrooms,  spores are produced on the lower part of the cap – on the gills, tubes, needles or pleats.”

Often a single mushroom can produce thousands of spores, which are released into the air or fall to the ground. Many of these are blown away but some mushrooms use other strategies. For example,  “the Clathrus ruber,  also known as the ‘red cage‘, has the help of insects to disperse their spores. In the final stage of maturity of this mushroom, the spores liquefy and become impregnated in the body of insects that loom over the cage-like structure.” They are attracted there by the mushroom’s  nauseating odour which resembles rotten meat. 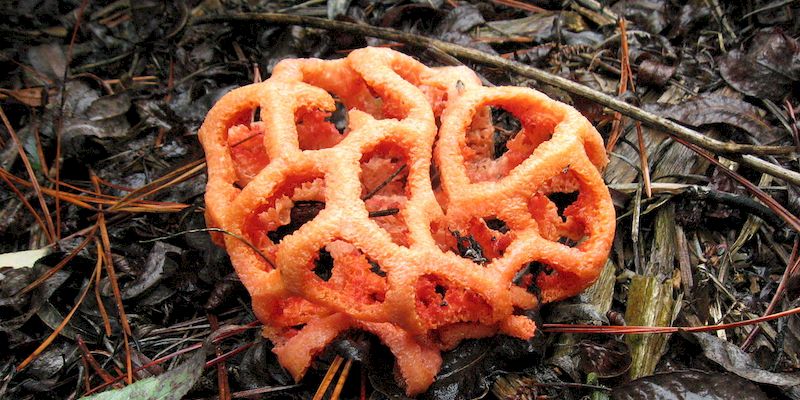 Reproduction usually takes place at this time of year, between the autumn and winter, usually in the following way: spores find other, genetically compatible ones and fuse together. It’s as if the fungi were having  sex. When this takes place, “they ensure greater genetic variability and are more likely to survive longer.”

Although they are microscopic, “spore deposition is visible to the naked eye” and is known as ‘spore print’. This feature is very useful to help identify different species, says the head of the Ecofungos Association.

To begin with, however, you can look out for these five mushroom species that emerge at this time of year in the Gulbenkian Garden and other green areas all over Portugal.