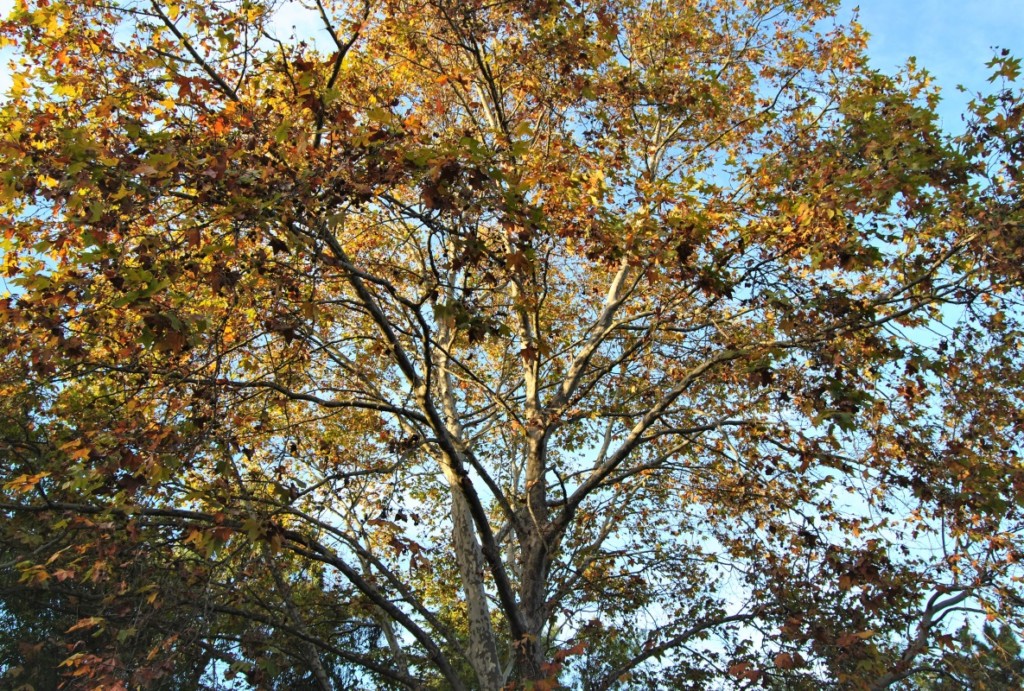 Member of the Platanaceae family, of the genus Platanus, the Platanus x acerifolia is a fast-growing, long-living deciduous tree that can reach a height of 35 m.

Its canopy is rounded and leafy. Its bark is thin and releases plates, acquiring a mottled appearance in shades of gray, green and brown.

The leaves are webbed, with 5 pointed lobes, bright, thick and light green, about 20 cm long, with woolly veins on the bottom page. They turn yellowish before they fall, in the autumn.

The fruit, a 25 mm spherical brown cluster of achenes, is borne in spring and remains on the tree until the following year. The seeds are numerous and coated at the base.

Of hybrid origin, the London planetree is the result of the crossing between the Platanus occidentalis and the Platanus orientalis species. It is naturalized on the banks of large rivers of permanent flow, in the northern and central regions of Portugal.

It is wind, pollution and root compaction tolerant, which is why it is widely used in cities. It has a preference, however, for fresh soils, rich in organic matter.

In Portugal, it appears more frequently at altitudes of up to 214 m.

The London planetree propagates through layering, rooting tree cuttings cuttings or by seed dispersal, although they do not germinate easily. The achenes produced are easily carried by the wind and can cause allergies.

Due to its resistance and wide canopy, it is widely used for ornamental purposes in gardens, parks and on urban streets. It is also used on the edges and divisions of forest stands and in northern Portugal, it is used as a support for hanging vines.

Its light and strong wood is used in carpentry. The leaves, bark and fruit were once used in traditional medicine.