Kwame Kwei-Armah, Artistic Director of the Young Vic, today announces the start of the Young Vic’s 50th birthday with a year-long programme of work entitled ‘We are the New Tide’, dedicated to the theatre’s milestone birthday. The 50th birthday year of work begins with three major commissions, including ‘The Unforgotten‘, supported by the Calouste Gulbenkian Foundation (UK Branch) as part of our Civic Role of Arts Organisations programme. The interactive art installation is an example of the innovative ways that arts organisations are responding to the pandemic, in this case turning the building ‘inside-out’.

The Unforgotten participates in and contributes to the ongoing conversation within the Black Lives Matter movement regarding whose image we uphold and elevate, offering the Young Vic’s community an alternative view of leadership. This interactive art piece adorning the Young Vic building features statues commemorating three unsung trailblazers of the Black community: Mary Seacole, a British-Jamaican businesswoman who set up the ‘British Hotel’ behind the lines during the Crimean War, Marsha P. Johnson, an advocate and activist for LGBTQ+ rights and Ulric Cross, a Trinidadian diplomat, RAF navigator, legal visionary and most decorated black serviceman of World War II. 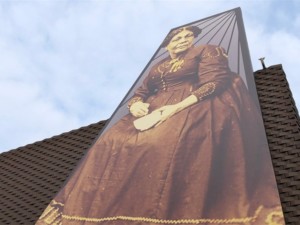 Created by artists Sadeysa Greenaway-Bailey and Anna Fleischle, the Young Vic community will be invited to contribute to the installation by submitting their own nominations in writing on the side of the building and online in response to provocations written by Jennifer Akre, asking us all to (re)consider who we celebrate as our heroes. In doing so, The Unforgotten typifies the Young Vic’s mission of speaking to the present moment and continually catalysing debate beyond the Theatre’s four walls.

Andrew Barnett, Director, Calouste Gulbenkian Foundation (UK Branch), said: “As we emerge into the ‘new normal’, arts organisations are helping shape what the future looks like. Through a new interactive installation, the Young Vic can continue to act as a ‘town hall’ in its community – providing a safe space for debate, encouraging creativity, and ensuring its community’s voice is heard during this challenging time. This programme demonstrates what it means to embrace one’s civic role.”

The Young Vic’s other birthday commissions include ‘The New Tomorrow’ – the first piece of live theatre at the Young Vic since the pandemic closed UK theatres, this weekend festival of speeches and monologues asks what the next fifty years hold; and the ‘Young Vic 50th Projection Project’ – celebrating the people and productions from across five extraordinary decades, illuminating the front of the Young Vic building each evening, with video design by Duncan McLean.