I was in Washington immediately after the last Marine CoLABoration workshop, mostly to attend a meeting of funders interested in understanding issues around marine plastics pollution. The scale of the plastic problem and the potential human health and marine biodiversity impacts are pretty sobering. It’s hard to get your head around facts like:

13 million tons of plastic waste enter the ocean every year and a plastic bottle will take about 450 years to break down into particles, which can persist for hundreds more, collecting toxins and entering the food chain along the way.

What we are trying to do in supporting the Marine CoLABoration is what foundations are often best placed to do – take a long-term view of problems that affect society and help to foster solutions which change the system that caused the problems. It’s a stark question, though, how we connect people with issues like marine plastics in ways which will create solutions at scale and soon enough.

While in Washington, I was invited to talk to the Deep Sea Conservation Coalition about what the Marine CoLABoration is up to, particularly its ‘values-based approach’. Decisions about the LAB’s mission and plan of activities had just been agreed so it was a welcome opportunity to discuss these for the first time with a new and expert audience.

I set the LAB’s work briefly in the context of the Gulbenkian Oceans Initiative led by my colleagues in Lisbon, which is focused more on economic valuation of marine ecosystem services. The LAB’s ‘values-based’ approach broadens this focus to uncovering and reflecting the multiple values that the ocean holds for humankind, be it cultural, physical, aesthetic, emotional, or the sheer fact of existence, in all its scale and biodiversity.

The LAB’s hypothesis is that current ocean governance is principally based on exploitation for short-termeconomic gain and that basing decisions on this narrow set of values is creating many of the social and environmental problems we see. Its mission is to increase the impact of solutions to ocean degradation by making a broader range of values count in decision-making. It does so by bringing together experts from diverse fields and organisations, creating a ‘Laboratory’ space to think differently and to test out new approaches.

My presentation to the DSCC finished with the picture you see above and a question: how does this connect with deep sea conservation? I expected this to prompt a conversation on the value of non-economic values in connecting people with the issues and creating change. How, for example, might we inspire for deep sea creatures the kind of gr 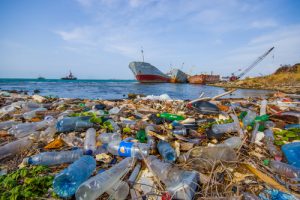 inning ear to ear exhilaration we all felt feeding the giraffes at London Zoo when ZSL hosted one of the Marine LAB sessions last year? And how might we translate exhilaration into acting differently?

Instead, discussion focused on the Gulbenkian Oceans Initiative economic valuation research, though I’d mentioned it only in passing. Where was the study site? What are the findings? Will they be relevant for the deep sea? There is acute concern over industry plans for expanding mining into ever deeper waters and a conviction that only economic arguments against exploitation will hold sway. Only afterwards, informally over lunch, did anecdotes emerge which underlined the power of other values.

Economic value is indeed the dominant frame – or is it? I was reminded of some recent research from the Common Cause Foundation, a survey of UK values, which suggests that Perceptions Matter. The research shows that people themselves value ‘unselfish’ values more highly, but believe that other people give preference to ‘selfish gain’, and this perception, which is reinforced by cultural institutions like schools and government, influences the parameters of their own decision-making.

The Marine LAB’s ambition is to help to change this, revealing the breadth of values that people hold dear. And the Lab’s first big experiment, the @OneLessBTL campaign, is tackling the issue of marine plastic pollution – in London. Over the next two years @OneLessBTL aims to decrease the flow of single use plastic water bottles into the tidal river Thames, along the way connecting Londoners [via economics, innovation, inspiration, commonsense, and common feeling] to their impact on the sea.