Like all good things, what happened in Rio a few weeks ago is a story in different but related parts.

It begins in 2010 with a visit to Brazil, a trip organised by People’s Palace Projects and supported by the British Council and the Arts Council of England. What I saw blew me away: people engaging in the arts in ways I’d not seen before. They were engaged, fully participating as equals – professionals and non-professionals – the disadvantaged given opportunities unimaginable, but for a few notable examples, in my own country. I shouldn’t have been surprised: Brazil is the country of Augusto Boal, the continent of Simon Bolivar. Their heirs live on in Marcus Faustini and many of the others whose work I saw and have been with us on the journey to Rio 2016.

Roll on a year or and a small idea (a concept, a mere inkling). The thought was – and is – that as a City welcomes the world to what is indisputably the biggest show on earth, that it doesn’t just make the space to ensure that there’s something for everyone but more than that: that there’s a part right at the centre for those whose lives are spent on the periphery. We see time and time again that as new buildings – sports stadia and complexes – rise like phoenixes from the dust, it’s people who already experience some of the greatest challenges that life can throw them that get ignored. Homes are bulldozed. People are moved on from the dusty streets, from the underpasses under which so many Carioca street homeless find shelter and camaraderie.

What we celebrated last week is just a small part of putting that right. But more than that: conferring on homeless people the same rights that the rest of us take for granted. The right to be listened to. The right to be taken seriously. The right to participate including in the Olympic Games.

The idea took on greater form when a few of us got together in 2011 with the brilliant Matt Peacock from the amazing Streetwise Opera and Ruth Mackenzie, charged by the London Olympic Games Organising Committee to curate the Cultural Festival, to respond to the simple challenge: how could we find a place in the great Olympic celebration for the people the homeless and the marginalised (those whom Matt has been working with for more than a decade)? How, through the power of song, could we bring them in from the edge? How – literally – could we ensure they are heard by coming together “with one voice”.

And so, in 2012, in partnership with other organisations working with homeless people through the arts (Cardboard Citizens and the Choir With No Name), 300 people with experience of homelessness took to a stage and not any stage either but to a stage in London’s own Royal Opera House. Those once described as “the people you trip over when you leave the opera”, came in from the cold and were welcomed to that iconic venue as equals. We were treated to more than a dozen separate performances and the most moving rendition of O Sole Mio, the Neapolitan song made famous by Pavarotti, by a single elderly homeless man positioned in the gallery and whose voice echoed around the space. More than a few tears were shed.

Now, those who know me understand that I’m difficult to please. A stage in the Royal Opera House. A one-off event. Sorry: but that wasn’t enough. We wanted the main stage; and two years later an ensemble of homeless people took part in a production of the famous opera by Poulenc (the Dialogues des Carmelites) under the direction of Sir Simon Rattle.

And at the same time, with the support of the British Council and the Foundation a study was commissioned into the state of homelessness in Brazil and a series of exchanges were begun: exchanges that included practitioners and policy makers from Rio and Sao Paulo spending a week at a time in London and Manchester together with the reverse: learning about the differences and similarities in each of these cities, being inspired by the work of organisations they visited and, quite simply, pushing the boundaries of what they thought possible.

And push the boundaries they have. Over two years not one but eleven separate choirs have been set up under the direction of choir master Ricardo Vasconcellos. The support of the Prefecture of Rio has been essential in providing transport and daily rations of food. They struggled to provide a formal licence for the choirs to perform in any one venue; instead they received a simple letter saying they could perform anywhere and everywhere and would be protected from being moved on by the police. 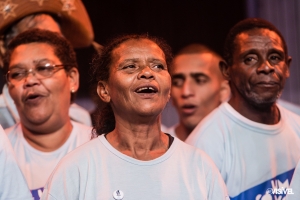 And it’s this that allowed a week long “occupation” of Rio to take place with the choirs literally popping up in iconic venues such as the steps of the Teatro Municipal (Rio’s equivalent to the Opera House) and the Museum of Tomorrow, a jaw-droppingly contemporary space which echoed to the sounds of homeless people singing and playing instruments. And as they sang, twenty homeless people wandered around the crowd on stilts a couple of metres high. The metaphor couldn’t have been lost on anyone and in this special venue which tells a story of tomorrow to its visitors. And on the Saturday evening we were treated to the main performance in which all the choirs came together in the new Biblioteque Parque, a building committed to opening its doors to people from any background and especially the homeless.

What’s happened has exceeded my wildest dreams. Truly. I’ve been blown away by the enthusiasm and commitment the people of Rio have shown to embracing the same questions we asked ourselves in London: how can we find a place in the great Olympic celebration now about to take place in Rio de Janeiro for the homeless and the marginalised? How, through the power of song, can we bring them in from the edge? How – literally – can we ensure their voices are heard by coming together “with one voice”.

Uma So Voz is the response and a typically Brazilian one: Rio occupation, eleven choirs and a group of people strengthened and committed to taking this beyond this week, continuing the work and handing on the baton to Tokyo when it takes on the mantle of Olympic Host City in just a few weeks’ time.

This doesn’t happen by accident. It happens by design and with the commitment of people like Matt Peacock, Paul Heritage and their teams, the British Council, the Prefecture of Rio and so many others. And it doesn’t come free: the Calouste Gulbenkian Foundation has committed a quarter of a million pounds to help sustain what’s been started – the next leg of the journey from Rio to Tokyo. The Macquarie Bank Foundation has matched this. We’ll be following this up with others who want to join us on this exciting journey: this amazing opportunity to put the people with hopes and talents just like the rest of us, but for whom life has dealt its greatest challenges, centre stage in the place they belong.

These photographs were taken by Agencia Visivel, volunteers who work to promote the development of social, environmental or voluntary projects they feel are important to society.