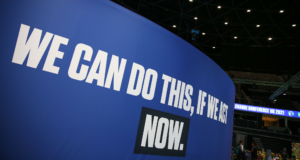 COP26 was hailed as the most important event for climate negotiations in our lifetime. From the perspective of ocean protection and public engagement on climate, what was achieved?

Natalie Hart and Mirella von Lindenfels (Communications Inc) From the lens of policy, the main achievement at COP26 was the formal integration of the ocean into the UNFCCC process. Historically, there hasn’t been much inclusion of the ocean in the climate conversation, so our strategy was to interlock the ocean and the climate closely. Though not nearly enough has been done to meet the 1.5 target, which is the biggest thing you can do to protect the ocean, there has been ocean progress and the dial has been turned.

Jamie Clarke (Climate Outreach) Climate Outreach focussed on putting people into the process by catalysing real action and raising the stories of people impacted by climate change and solutions driven by citizens. We were pleased at the way that we aligned our different activities to put a human face to COP, certainly within the Blue Zone, where lots of imagery were based on our Climate Visuals initiative. This makes people connect with the fact that COP26 isn’t just a technocratic process.

Rich Wilson (Global Citizens’ Assembly) Public engagement on climate had a big profile in the UK during COP26, so this was a gain. But the whole thing proved that the COP and the wider UN process are in need of a fundamental reboot. Though many people at COP26 were heroes, making the best of what is a challenging situation, the gap between policy and the official statements that come out of it is always enormous. Getting hung up on the preciseness of language, often a smokescreen, has led to an inevitable blaming game that is symptomatic of a governance process that doesn’t support deep respect between people. Though new voices were heard for the first time at COP, it needs to be redesigned to become a genuine partnership between politicians, business leaders, and civil society groups.

COP26 left people disillusioned with G20 governments and their willingness to put measures in place to reach net zero. If citizens don’t feel their environmentalist demands are represented by their national governments, what avenues are there for public engagement on climate-ocean action?

Jamie We’re all agents of change to some degree. I think you can still influence government action. They may not have signed up to the highest ambitions in Glasgow, but there are still very key decisions that have been made for the next two years –  the rollout of low carbon initiatives and schemes, the sustainability education bill, etc. Moreover, as a consumer, you can put power on corporations, but you could also influence within your place of work. Using your voice with colleagues or others in your community, who you relate to and they relate to you is probably one of the most powerful things that an individual can do. Talking about why you’re not eating meat or why you’re choosing to fly less can turn it into a real life conversation.

Natalie  A lot of the work the Gulbenkian funds is about a values-based approach. That means appealing to the values of different groups of people, an approach that is really important for one-on-one personal interactions. It helps everyone within society understand that this is an issue that is important for different reasons, and that they can come to the conversation in all different ways.

Rich Regarding citizens’ assemblies, they should work around three objectives. One is to influence powerholders, policymakers, or others. Two is to activate citizens to do stuff themselves, in spite of other people. Three, which might be the most interesting, is modelling alternative forms of governance, which I think is key. If we look at it, citizens are always ahead of governments on climate, coming up with policies that are more commensurate with the challenge we face, and showing more responsibility for what needs to happen. I think we’re either in a situation where politicians either need to become much better at keeping us safe or they need to get out of the way, and allow citizens with the technologies we have to actually govern themselves.

Now that the ocean has become embedded in the UNFCCC process, what are the main gaps of action and priorities for next year?

Mirella COP26 is just a stepping stone, so the job now is to translate this achievement into agenda-related action. The ocean hasn’t come up yet in Nationally Determined Contributions and states haven’t made commitments to ocean protection as climate action. So there’s a lot of unpicking still to do there, which we can shoot for in 2022, particularly at Convention on Biological Diversity, COP27, and IMPAC5. More generally speaking, we need to make sure through the alignment work we do that in being welcoming about the ocean inclusion in the text, we don’t lose sight of the bigger context, because we still didn’t hit 1.5. At COP26, there was direct engagement of people working in the ocean with those working on climate and the ocean has filtered into larger media coverage – this is the kind of foundation we need to build upon.

And for public engagement, what are the main gaps of action and priorities for next year?

Jamie At COP27 in Egypt, we want climate to move from an awareness issue to something that people are getting more and more connected with. And this must be done across all segments –  left, right, young, old, rich, poor. In the past, there was just a big barrier there, but I think we’ve reached the point of acceptance. But that point can be transient and disappear. It’s how we drive through that will matter.

Rich The first objective is scaling. Deliberative processes like citizens’ assemblies are profoundly effective because that is where mutual understanding between different people happens. Unfortunately, there are just far too few people involved for the benefits to get shared. For this to happen, we need to aggressively and rapidly scale citizens’ assemblies across the country – this can be in schools, communities, local authorities.

The unprecedented scale of response from local and national authorities to the COVID-19 pandemic has proved that creating immediate massive change at all levels is possible. What can be learnt from the pandemic for the way the public engages with issues like climate change?

Jamie Psychologists talk about a finite pool of worry, that we can only cope with so many things a day. But actually, actually COVID has exposed that might not be the case. We’ve seen people being more concerned about these big global issues than they’ve ever been before. The pandemic has given a very tangible example of where governments can make massive transformations that you wouldn’t know were conceivable before. It’s also shown citizens the role that governors have, which may lead to the reparation of the democratic deficit.

Natalie Climate has moved up in people’s priorities. The EDF Energy tracker, a global barometer of public opinion, has shown that over the course of COVID, the climate has actually moved up as a priority concern for people. Early on, there was this concern that everyone would be too worried about COVID to think about the environment. But that sort of research has shown that it’s gone the other way. 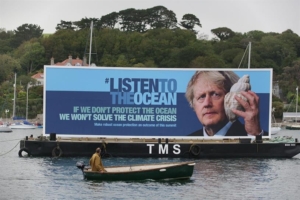 ‘Listen to the Ocean’ campaign during the G7 Summit in 2021.

Images played a central role in your strategies during COP26, with the #ListenToTheOcean campaign and the Climate Visuals exhibit. What role can images play in climate action, beyond the stereotypically apocalyptic and inertial climate visual culture?

Jamie Climate change has been stuck with a very stilted iconography of glaciers and polar bears. And that’s not very relatable to most people, nor is it very motivating for most people. It’s critical that the images we choose to talk about climate represent those values that people hold most dear. You need the alarm bells to be rung, but you also need somewhere to run to. And so the imagery needs to fulfil both of those, not just the first one, which turns a lot of people off. We need new stories from new people about new aspects of climate change.

Mirella It is quite hard to make the ocean feel relevant and present. And it’s also very hard to get good images of it. Though we can have a people-centric approach when talking about coastal communities, it’s hard to do it with topics related to the deep sea. With #ListenToTheOcean, we have tried to bring the ocean out and just say ‘the ocean is talking to us’. We tap into things that people recognize from their childhood like listening for the ocean in seashells.

What gives you hope as a climate activist?

Jamie What gives me optimism is having random conversations with people on the street who care about climate change. I can talk to anyone about climate change, which has never been the case before. And that gives me hope, because if you’ve got people talking about it, then we can achieve anything. It’s not going to be easy, but we’ve got this societal foundation now to build on.

Mirella I won’t buy into some kind of fantasy that it’s all going to be alright, but I do have hope that we will achieve enough. Something that has given me hope in the last year is the number of different voices that are now going ‘wow’. Fundamentally, I have hope in the ocean, which is on our side in mitigating climate change in a way that is essential for life on Earth. But we need to achieve some protection.

Rich People and the possibility of developing deep and profound connections with others. For me, the answer to the climate crisis is about love. It’s about love for the earth and love for other people. When that happens, and those moments emerge between people and the earth, is when I know anything’s possible.

Jamie Clarke is Executive Director of Climate Outreach, a team of social scientists and comms specialists widening and deepening public engagement with climate change, beyond the green bubble.

Mirella von Lindenfels is the co-founder and Natalie Hart is the Senior Account Director of Communications Inc. They work with the Marine CoLAB and the One Ocean Flotilla to align the ocean community around key strategic moments and advise them on messaging.

Rich Wilson is the founder of Global Citizens’ Assembly, a growing movement representative of the world population being brought together to learn and deliberate on the climate and ecological crisis.