It’s a sad fact of modern life that although cities can be very multicultural, too many of us do not interact with people of different cultural backgrounds. Despite being neighbours, we can lead very singular lives, which means prejudices are never broken down.

Out of that problem came an opportunity. In 2013 the Sacred Sounds Women’s Choir was created to perform at the Manchester International Festival. The idea was to bring together women from very different cultural backgrounds to form a multi-faith choir, to learn a wide repertoire of songs, prayers and chants from across the different faith groups.

We supported this choir as a pilot, and when the choir expressed a strong desire to stay together when the festival was over, we continued to support them in this endeavour. 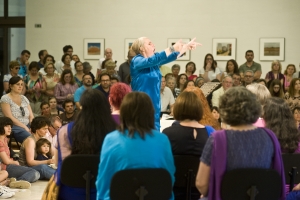 The Calouste Gulbenkian Foundation is celebrating its 60th birthday, a time to reflect on our achievements and celebrate. Over two weeks in June, visitors to the Foundation in Lisbon enjoyed an eclectic music programme spanning genres from classical to Fado, a form of traditional Portuguese maritime music.

It was fitting that in a celebration of Gulbenkian values, where world music was being performed, to bring the Sacred Sounds Choir to Lisbon to sing. The Choir performed its impressive repertoire of songs in languages such as Hebrew, Latin and Sanskrit.

The Portuguese audience greatly enjoyed listening to the Manchester women perform. They sang along at some of the choruses and moved in response to the energy of the performance.

And the women from the Choir enjoyed being in Lisbon. For many it was the first time they had visited Portugal. The choir was moved by the warmth of the audience and their eagerness to participate in the performance as much as possible. They also felt an enormous sense of achievement in giving their first international performance.

The choir was moved by the warmth of the audience and their eagerness to participate in the performance as much as possible. They also felt an enormous sense of achievement in giving their first international performance.

The Calouste Gulbenkian Foundation’s UK branch sees non-professionals taking part in the performing arts as an enormous source of social benefit, because of the skills it fosters and the connections it forms. You can read about our work, called Sharing the Stage, here.