Marking World Ocean Day with a call to action

Today, World Ocean Day, is the launch of #OneLess, a campaign to end single use plastic water bottles in London by 2021, and we are celebrating everyone who has pledged to start using refillable water bottles in a bid to cut down on the plastic clogging our seas and coastlines.

The#OneLess campaign is an initiative of the Marine ‘CoLABoration’ of NGOs the Gulbenkian Foundation has brought together to explore how we can communicate the role of the ocean in people’s lives more effectively and change things for the better. 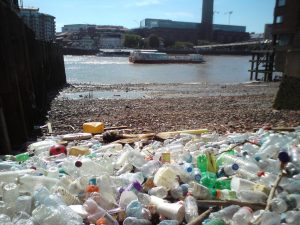 Plastic bottles on the Thames

Marine plastic pollution is a serious and growing threat to the ocean. Plastic bottles are one of the most obvious items of marine litter and one of the easiest to deal with. We consume over 13 billion each year in the UK, only around half of which are recycled. But Londoners, who through the Thames send enormous amounts of plastic out to sea, can help to change this by not buying single use water bottles and instead using refillable ones. That’s why the campaign’s called #OneLess – every time you drink from a reusable bottle, one less plastic bottle is thrown away.

One of the Marine CoLABoration groups we are working with is the Zoological Society of London (better known as London Zoo). It announced today it has stopped selling single-use plastic water bottles and will now only offer refillable plastic ones and fully-recylable paperboard drink cartons. Dr Heather Koldewey, Head of Marine and Freshwater at ZSL London Zoo, writes here about the effect of plastic on wildlife in the ocean, which is why the ZSL made the change.

It’s also heart-warming to see the department store Selfridges continue to spearhead change in the business community. In 2015 Selfridges was the first retailer in the UK to permanently remove and stop the sale of single-use plastic water bottles. This morning staff will be on the Thames foreshore litter picking and this afternoon its Bottle Blitz teams will be out working with ZSL to survey Londoners’ use of plastic water bottles.

But it’s not just organisations and companies making the change. Individuals all over London have pledged on social media to stop buying single use plastic bottles. Visit the pledge page here or search for #OneLess on Twitter and you’ll see those vowing to only use refillable drinking bottles.

Here’s how to join in…