For Hannah Fox, the Creative Community Fellows (CCF) programme could not have come at a more opportune moment. Having recently joined the team that was overseeing the launch of Derby Museums in 2012, she was feeling excited but understandably overwhelmed by the task at hand. After all, this was no easy feat, as Hannah recalls, “While the organisation was new in its name and values, it actually had 100 years of tradition behind it and needed to find its own feet…”

Hannah had first become involved with Derby Museums through the Derby Silk Mill project, starting off as a temporary project manager before joining the organisation in a permanent role, “A six month project turned into year, then a permanent role as the project took on its own life”. While fully committed to the project and the community it served, like many leaders in the arts and cultural sector she had begun to feel the pressures of her job. On top of this, the newly formed Derby Museums was going through a period of rapid transition, including changes in senior leadership.

“Someone asked, ‘well, why are we doing this?’ …It called everything into question.”

In early 2014, a management meeting was held to welcome Tony Butler as the Museums’ new Director. It was here that an exchange with a colleague led Hannah to ask herself some difficult questions, “Someone asked, ‘well, why are we doing this?’ I said, ‘this is about Derby and the people of Derby’. The challenge rightly came back, ‘but is it though? How is it?’. On any normal day, I would have said ‘of course it is’. But in the place that I was at personally, it called everything into question.”

The conversation unexpectedly surfaced Hannah’s worries, “That exchange was the key that unlocked it all and I just started crying. I couldn’t stop. I tried walking around the museum, I tried lying on the floor. I locked myself in a room, I splashed cold water on my face. I was doing everything I could, but it didn’t stop this emotional explosion.”

“That exchange was the key that unlocked it all and I just started crying. I couldn’t stop.”

Hannah realised she needed to address two key concerns. “All the things I was worrying about came to the fore: how can we convince funders to provide support when we don’t know what this co-designed project will look like yet? And how do I stay true to the community values that are the essence of the project?”.

Two days later, an email arrived from her boss mentioning CCF, “Tony tapped me on the shoulder and said, ‘this is you’.” The programme’s principles and language of cultural and social entrepreneurship resonated; two hours before the deadline, she submitted her application.

Building a global community of leaders

Hannah was one of 25 fellows to join the Community House on the first CCF programme in the US in 2014, in addition to another 25 who participated online. The programme is designed and curated in a deliberate and considered way to both build a sense of community and support individual needs.

“I thought I was going because of the project, but it’s a vehicle through which you describe who you are and what your values are.”

Hannah describes the programme as “values-driven”, focusing on the individual and what drives them, “You’re not coming as a job role, you’re coming as a person, with your flaws and creativity. You might be doing it alongside your day job, or as part of your job, you might be an enabler or involved at the grassroots, but we all share this passion to make things better in our communities.” There is a real emphasis on supporting people to grow as leaders, “I thought I was going because of the project, but it’s a vehicle through which you describe who you are and what your values are.”

“You’re not coming as a job role, you’re coming as a person, with your flaws and creativity.” 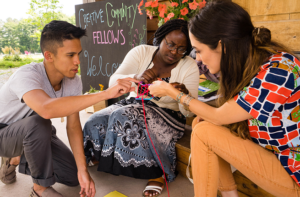 It’s the mix of people that makes CCF unique, says Hannah, “It’s the most diverse network that I have. I’m in conversations with people who don’t think like me – they might have similar values, but they don’t think the same as me and don’t have the same experiences I do.” This network remains strong years later, “even earlier today I had someone from my cohort connect with me to share experiences.”

When she returned to the UK, Hannah felt re-energised, “that moment in the meeting was needed. I had been exhausted by it, but afterwards I felt like I had clarity to what I wanted to do next.” With this new outlook, she was able to help the values and hallmarks of Derby Museums to be more clearly articulated and honed, “We then became very overt with saying ‘this is how we work’.” Now, the Museums are renowned for a commitment to coproduction and human-centred design. This clearer organisational identity “helped with training staff teams in how we work and what we stand for, and for them to go out and use that in a way that feels best for them.”

“I’m better able to see myself as a leader, my role in my community, and how I can best support other people.”

The programme was also transformative on a personal level, “I got a lot clearer with myself about who I am. I’m better able to see myself as a leader, my role in my community, and how I can best support other people.” Importantly, Hannah was able to answer the two questions that had triggered this journey. She returned “fired up with strategies” to convince funders to support co-produced projects. 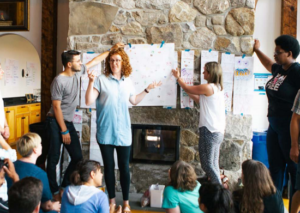 She also saw in herself the leadership skills needed to hold true to the community. For Hannah, a good leader is “anyone who can convene folks around a problem or opportunity and creates the conditions for those people to collaborate and take their ideas forwards to achieve a shared goal. I think these conditions include the space to collaborate, experiment, be vulnerable and be brave.”

UK Creative Community Fellows is built on the original CCF programme created by NAS, a United States-based organisation that builds and supports diverse communities of cultural leaders. UK CCF is a partnership between Derby Museums and NAS, supported by the Center for Social Impact Strategy at the University of Pennsylvania. The programme’s faculty and facilitators are drawn from all three institutions.

The UK iteration of CCF will use anchors of the US programme such as the Community House and the strategies that help frame the curriculum. However, this iteration will be locally designed and delivered. Hannah explains, “It’s absolutely bespoke to the UK. At the same time, we’re really clear about not reinventing the wheel.”

“The curriculum that we’ve been developing is right for this period. It’s about supporting your communities through really tough times.”

The other big contextual difference is Covid-19, which has been devastating for the arts and cultural sector. Hannah acknowledges that while leadership programmes are highly relevant, “we didn’t want to add to the stuff that folks have had to think about.” They extended the recruitment and a cohort will begin later in the year. Hannah hopes the programme will be a lifeline for arts and community leaders, “the curriculum that we’ve been developing is right for this period. It’s about supporting your communities through really tough times. It’s about you as a leader having the right tools, strategies, and networks to feel supported and energised.”

Her advice for this year’s fellows? Prepare to be surprised where the programme takes you: “You’re being helped and supported to redefine your project, look at it more deeply, and understand the direction of travel. It can often be quite different from where you started. And that’s really exciting.”

Derby Museum and Art Gallery will be re-opening on Tuesday 7 July. Pickford’s House and the Silk Mill remain closed.