You might have seen in The Telegraph this morning or all over social media the hashtag #BluePlanet Champion.

That’s the tagline of a joint campaign we’re supporting. 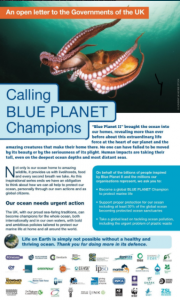 At a workshop on effective marine funding we held here at Hoxton Square a few weeks ago with John Ellerman and Esmée Fairbairn Foundations, the group was discussing ways to use the increased public interest in the ocean. The group had the idea to use Blue Planet II to call on the Government to take three key action points. They are:

We are delighted that 37 different charities have worked to co-sign this call to action. Click here to see what was printed in in The Telegraph this morning.

And more can join this movement – just tweet #BluePlanetChampion if you agree with the three actions above. You might have more specific ideas too! 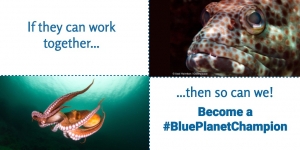