The arts and homelessness occupation of Rio

Between 18 and 25 July, With One Voice – together with People’s Palace Projects and supported by Calouste Gulbenkian Foundation UK Branch, British Council and Macquarie Group Foundation – delivered almost 40 workshops, pop-up performances and training events in Rio as part of the 2016 Cultural Olympiad (‘Celebre’).

The events spanned music, dance, poetry and theatre and involved homeless and professional artists from Brazil alongside counterparts from Portugal, UK, USA, Australia and Japan. The programme was designed around what the Brazilian partners and Rio homeless people called an ‘occupation of arts and homelessness’ – they wanted to give homeless people visibility and dignity through events on the streets and in hostels and cultural institutions throughout the city.

The kaleidoscope of workshops included: Yuki Aoki from Sokerissa (Japan) running dance sessions in homeless centres and working with Rio’s Ru’Art programme which runs in favelas; drama workshops from three of the world’s leading theatre of the oppressed companies, Cardboard Citizens (UK), Milk Crate (Australia) and Theatre of the Oppressed NYC (USA); a verbatim theatre piece featuring a young transgender homeless woman called Welldonna performing with one of Brazil’s leading TV stars, Georgiana Góes; meetings between the Homeless People’s Movement and Jez Green from the Manchester Homelessness Charter, which has been inspired by the Brazilian movement; choir leader training by Pete Churchill from The Choir With No Name; musical instrument-making workshops run by Jorge Augusto, a formerly homeless musician from Porto; and poetry workshops led by Kanayo Ueda, a poet and activist from Osaka who is transforming a deprived area of the city using the arts.

Scattered through the week like precious jewels were several pop-up choir performances by Um Só Voz (With One Voice) choirs – the 11 Rio choirs we have helped set up, led by inspirational musician and support worker, Rico Vasconcellos. The performances took place all around the city including on the steps of the Teatro Municipal, on one of the Olympic stages and at the iconic Museum of Tomorrow. At every performance, crowds gathered to cheer and dance alongside multiple TV and print journalists.

It was perhaps at these performances where you could see the magic of the project most vividly. Rico always carefully assembled the choirs, putting the most vulnerable performers at the front and often getting the singers to introduce themselves by name. The members came from hostels, recovery centres and many directly from the street – no matter what their situation was, they smiled and sang their heart out, hugging each other and the audience at the end.

This was our third arts and homelessness exchange in Brazil over more than a year, and during that time, we have seen the growth of the sector. There is now an emerging network – not only a of choirs but also including a dance group, a circus group, and a committee of artists, NGOs, representatives from the City Council and Public Defender’s Office, and members of the Homeless People’s Movement. The network is also the first time Rio’s homelessness NGOs have met and worked together.

The arts and homelessness world is learning a great deal from what is happening in Brazil. The country has always been a world leader in social welfare and the arts with extraordinary projects emerging from the favelas (such as AfroReggae which has toured to London a number of times) but very few arts projects have worked with homeless people on the streets. Not only have we been able to build this, but we have also begun to connect established favela projects, such as Agencia and Crescer e viver, with work on the streets. Meanwhile there is a collection of arts institutions such as Biblioteca Parque, Museu do Amanhã and MAR which are leading the way in opening up to homeless people who live on their doorstep. The library Biblioteca Parque has almost 250 homeless people per day in the venue, accessing the collection and taking part in reading groups, gardening groups and other activities. The world of cultural institutions could learn from this exceptional policy and we aim to help connect them. 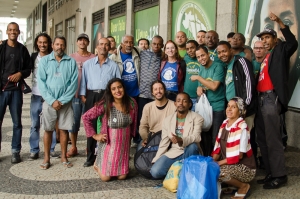 The ‘occupation’ week culminated in a showcase event with performances from international and Brazilian projects on 23 July. It was a joyful affirmation of the importance of creativity – the choirs belted out famous Brazilian songs, a favela protest song and ‘Freedom’ which had the audience literally dancing onstage with the performers at the end. There was symbolic handover from Brazilian to Japanese homeless people (as Tokyo is the next Olympic city) through a work of art made by a homeless man in Rio which was presented to the Japanese performers. And we all sang the ‘Song of Home’, which was written by homeless people in Osaka.

The official launch of ‘With One Voice’

At the end of the event, we launched the first international arts and homelessness movement. Until now, With One Voice has been about isolated projects in Olympics cities. This launch marks it becoming a full-time movement – running exchanges in many other countries to share exceptional work and polices like the Homeless People’s Movement; providing resources including the first online map of international arts/homelessness; and offering mentoring and funding for new initiatives – to help strengthen the whole arts and homelessness sector. You can visit our website here – the movement is free to join and we’d love to hear what you think. Ours is a small and poorly-funded sector globally and we all struggle each and every day, but together we can make it stronger and help more projects and people who have experienced homelessness throughout the world.

As the Olympics gets underway and our Rio choirs continue to perform at events throughout the city (hopefully including the official lighting of the Olympic torch at the statue of Christ the Redeemer), we focus now on sustaining the work we have started.

Homelessness destroys millions of lives around the world. In Rio, with people sleeping on nearly every street corner, it’s easy to feel powerless and think there’s no way the arts can make a difference. But seeing the joy, the laughter and dignity of hundreds of homeless people in Rio last week has strengthened my resolve to spread the use of the arts as far and wide as possible. No matter where you are, no matter who you are, creativity is in all of us – it can remind us that we don’t always have to be defined by our problems. So many people achieved so much that week and will continue to do so over the coming months and years. Nobody can take that away from them. And this is just the start.

The photography in this piece was done pro bono by  Agencia Visivel. Read more about its work here.