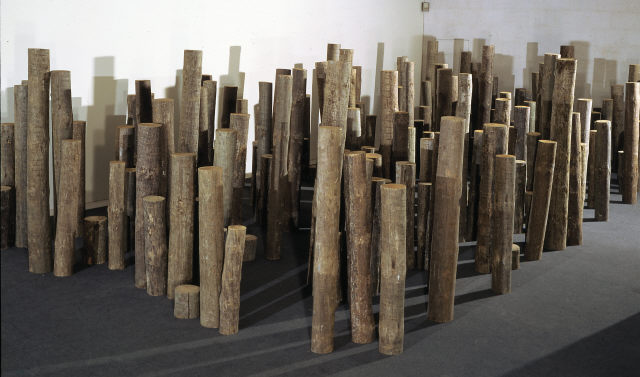 Alberto Carneiro’s words clarify how Uma Floresta para os Teus Sonhos (A Forest for Your Dreams) should be understood. The artist was a global pioneer in the use of the concept of ecological art applied to artistic practice, and writing has also assumed an important role in his career, not only as a confessional vehicle or as a means of revealing his artistic intentions, but also as raw material for his visual art.** But the ecological in his work is not merely a discourse or knowledge of living beings or the physical and biological environment in which they live. Nor is it an art of the land or a geoarte, an expression which would be a limiting translation of the English term “Land Art”, but rather an art that is a communion, an integration of the land as a sensorial and founding part of humanity, as the title of thiswork in some way makes clear.

This is an installation, or, as Carneiro would say, a natural sculpture or an envelopment, which was created by the artist on his return from London, where he had undertaken post-graduate studies at Saint Martin’s School of Art (1968-70) under the direction of Anthony Caro and Phillip King. It is worth pointing out that when Carneiro arrived at this prestigious school, Hamish Fulton and Richard Long, who would become key names in the land art movement, were graduating. However, when comparing these artists, it becomes clear that Alberto Carneiro has created a language of his own and a way of being in life and art that is unique and irreducible to schools and artists.

In Carneiro, nature is not something remote and his work does not result from the desire of urban dwellers to come into direct contact with the primordial elements, seeking a mystical and religious connection, a reconnection that city life apparently prevents them from having. Rather than being a concept, nature is the starting point from which other places happen. It arises not as a representation but as presentification.

Presentification and transposition, because the natural elements are transported or transferred to the artistic space – the gallery or museum – just as they are. In other words, representation is abandoned for good: a tree trunk is not presented through a drawing or a photograph. Rather, a real tree trunk is shown in Uma Floresta para os Teus Sonhos, in which 200 tree trunks of different sizes and heights can not only be seen but also traversed and touched. It is easy to understand why, to this day, the artist still prefers the term envelopment to installation, bearing in mind that his aim is to bring about total immersion in the work, and for the work to reach observers’ bodily senses, including their sight, touch, and smell. In this “forest”, Alberto Carneiro offers us direct contact: he presents rather than represents.