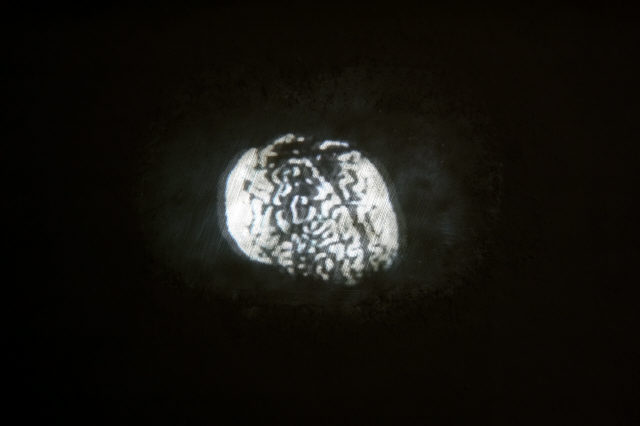 Think About the Pain of Breathing

This video, constituted by an image projected on a small scale, Think about the Pain of Breathing brings together the technical means of video and of the moving image, to become a fake maxim, a short enunciation of minimalist structure, repeatedly projected and suggesting truth, word of wisdom, or virtue (as with propaganda): the sequence is organised around three plans that follow each other without beginning or end, suggested by the circularity of the visual projection. The proposal after which this artwork is named, in imperative form, appears to suggest a general principle, a rock hard precept or a piece of life advice, although with too much of an illogical content for the human being: “Think about the pain of breathing”, enunciated in yellow characters on a black background. The dissolving of this expression on the shape of a lit brain, the organ of thought, and, finally, the transformation of the image of the brain into the image of a human face captured in a grin of suffering, under an intense red light, compete to provoke a sense of confusion fed by tautology as well as by the assertion of a cognitive paradox: breathing, one of human being’s most automatic body movements, the support of life as well as of thought, is here questioned as a conscientious and intentional representation, allied to a perpetual state of hurt and pain, or suggested as such.

The author of multiple and fertile works, which range from the visual arts, performance, scenography and musical creation, João Paulo Feliciano’s literary and linguistic training (the artist graduated in Modern Languages and Literatures) is visible in this artwork, which expresses his interest in language games and acts of speech, on stylistic devices, as well as in writing conventions, to which he joins disturbing and disruptive visual images.