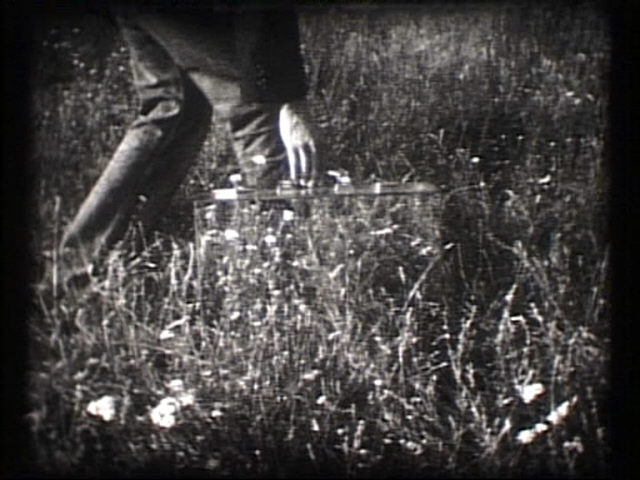 We can assume that memories are what the man in The Mirror Suitcase Man keeps in his mirror suitcase. However, the functional reversing of the suitcase places the main events outside of it (in the reflection of the image).

We focus all our attention on this object, which mirrors the city, people, transport, trees and streets. Arrivals and departures of the train or underground, doors that close, stairs that go up, station platforms, passing cars – the character’s wanderings are slow, sometimes pausing, but varied, working like a record of the anonymous movements in the city. It is as if the time of the wandering, of the movement, is the main enduring memory of this unintended crisscrossing within the urban fabric.

Occasional slow motion, a white flash or a cut between images, the sound of a typewriter, organ music, a few almost imperceptible phrases in French, the sound of a scratched record and the grain of an aged black and white image contribute to a foggy overall environment which is lost in time, almost dreamlike, with no bearings.

The suitcase opens a hole in reality. Within its restricted space it creates an abyss, a screen, a microcosm in which parts of this reality are transformed from truth to fiction, from an extensive whole to a cut down version. Oblique planes, rising land, a spiral staircase, swings, wind through the trees, the orthogonal position of the suitcase in relation to the end of the street seen in its reflection, multiple viewpoints: the low-angle shot, the depth of field, close-ups, contrasts and reversals in the mirror, accentuate this spatio-temporal malleability and unreality. The passage of lines of artificial light through the points at which the image is formed is yet another way of creating perceptible intermittency and a kind of inebriated dip into illusion.

With the river and kerb that emerge at the end, the piece refers to the idea of a territorial boundary, expressed by the suitcase throughout the sequence. The hand which holds it and the formally dressed character walking with it, have the rigidity and constancy required to create the inevitable concentration on the protagonist object: a suitcase which rejects its internal function, exchanging it for an external one. The reflection of the city becomes a reflection in the memory of what is perceived and the likelihood of reality itself. In the mirror suitcase space, nothing is saved and everything is exposed; in this sense it acts as functional antimatter, an anti-image of reality.