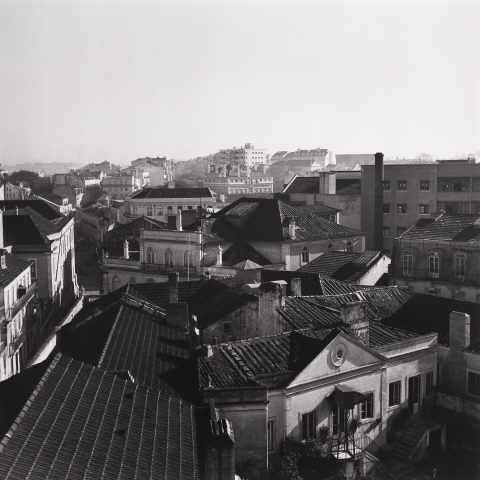 According to the artist, this was the first photograph taken with his Flexaret – a cheap Czech medium format camera – from a window of his house in the Rua do Sol ao Rato, in Lisbon.

This image does not belong to the photographic realm of deliberate compositions and portraits which Lemos was to become known for. Here the artist is instead concerned with the specific nature of photography as a method of representing reality. He uses this to depict the city and the space in which he would encounter the Portuguese cultural elite and makes, at the same time, his first foray into the technique that would be his favoured means of expression until he left for Brazil in 1953.

Formally, it is a photograph of an urban landscape which could be simply that – a personal memory of a first image – but which, by being transferred from that sphere of private memory to a wider context of the artist’s work, acquires new meanings which transcend those formal qualities.

For Lemos, Lisbon marked the beginning and the conclusion of a sustained and consistent photographic journey. And it was the setting in which Lemos dreamt up new possibilities, created light and shade, revealed certainties and concealed anxieties in a unique fashion until, his freedom having been curtailed, he went into voluntary exile on the other side of the Atlantic, feeling more ‘anger than longing’, in the words of his friend and colleague José-Augusto França.

This, then, is an image representing a start, but also an end, a proclamation and a farewell, a beginning and a new beginning.