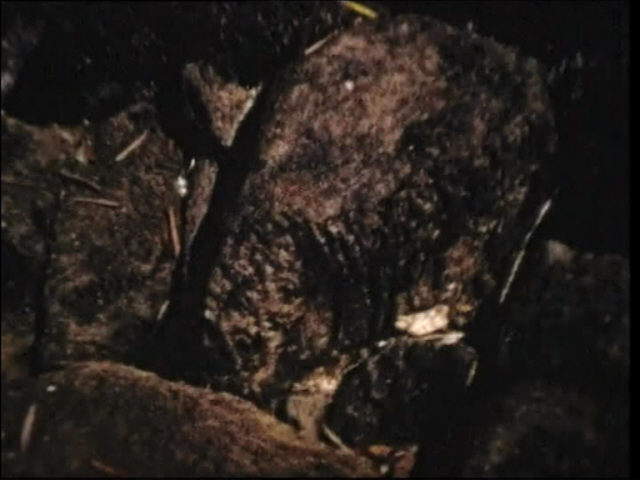 During the 1970s, Ângelo de Sousa made a series of experimental, narrative-free films. Whilst studying at The Slade and St Martin’s School of Art in London (1967-1968), he discovered the films of Stan Brakhage (1933-2003) and Andy Warhol (1928-1987), and the connection with these North American artists is quite clear in this non-narrative context.

In the films he made between 1972 and 1978, Ângelo de Sousa directed his camera towards the ground. This intentional approach to filming resulted in a group of works to which Ribeiro [Stream] (1973) belongs. Ribeiro is also one of a number of films whose fundamental themes were natural motifs: vegetation, running water, stones (Ribeiro), flowers (Flores Vermelhas [Red Flowers], 1974), trees (Marmeleiro [Quince Tree], 1974), plants (Sombra de Trepadeira [Climbing Plant Shadow], 1974). In these works, Ângelo de Sousa blurred the image creating kinetic effects of great luminous intensity, resulting in colourful images and visual games which stimulate the eye.

There is an obvious interrelation between Ângelo de Sousa’s films and his pictorial output. The artist himself stated that the images in his films were not just influenced by his past works (see the two untitled works from 1966 belonging to the CAM, I and II) but also influenced his future work. In this sense, Ribeiro resembles the colourful paintings which the artist would go on to produce (see the work of the series Pinturas [Paintings] from the collection of the CAM: 1973, 1974, 1983). This similarity is exemplified still further by the slow speed of the film, which creates the sensation of a blurred, colourful image filling the screen.

Ribeiro portrays a specific landscape inhabited at certain moments during the film by the presence of the artist himself, in a kind of self-portrait concealed within nature.